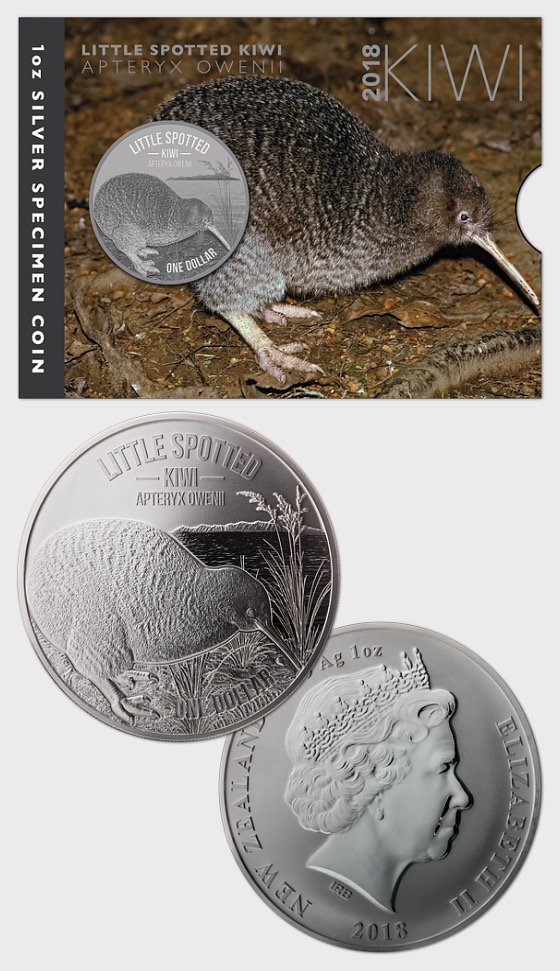 The 2018 Kiwi coin continues to celebrate the kiwi as a national icon which represents the uniqueness of New Zealand’s wildlife. The little spotted kiwi (Apteryx owenii) is the centre of attention in this years issue.

The little spotted kiwi (Apteryx owenii) is the smallest of the five species of kiwi still roaming around various parts of New Zealand. It is the only species of kiwi to have become completely extinct on the mainland; luckily it is thriving on various islands dotted around New Zealand and is now back on the mainland in some predator-free fenced sanctuaries. Kapiti Island has the largest population of little spotted kiwi, with numbers of around 1,200. With the additional numbers from other islands and sanctuaries such as Tiritiri, Red Mercury, Zealandia (Wellington), Chalky and Anchor, the entire population had reached 1,700 in 2013.

Little spotted kiwi chicks hatch with a spring in their step. These adventurous youngsters will leave the safety of the nest when they are around a week old to forage for themselves. Luckily, their protective and much larger father is never too far away from the chick for the first 60 days.

Take a closer look at the unique little spotted kiwi on this 1oz silver specimen coin.

Minted from 0.999 silver Limited worldwide mintage of 7,500 It has a unique finish which separates it from the three proof coins Comes with an individually numbered certificate

This 1oz silver specimen coin uses multiple polishing techniques to bring out the details of the kiwi and Rauoterangi Channel, the stretch of water spanning the distance between the mainland and Kapiti Island.

This stunning coin features a unique finishing technique that sets it apart from the three proof coins in this issue. Minted from 0.999 silver, it comes packaged in a collectable display card which gives further detail on the little spotted kiwi. With a maximum worldwide mintage of 7,500, place your order today.