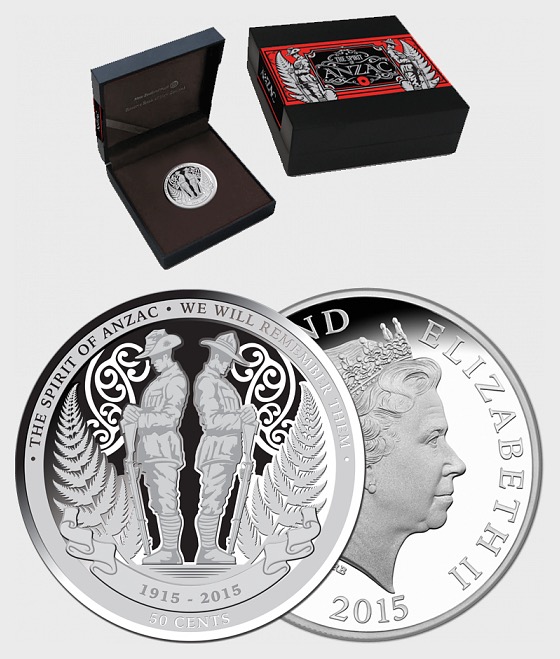 About 2015 The Spirit of Anzac Premium Silver Proof Coin

2015 marks 100 years since the Gallipoli campaign, where New Zealand fought alongside Australia and the ‘Spirit of Anzac’ was born. We remember our troops 100 years on with this special Anzac commemorative coin collection. The collection included New Zealand’s first- ever commemorative circulating coin, issued by the Reserve Bank of New Zealand and distributed exclusively through New Zealand Post and Kiwibank.

For many years, New Zealanders and Australians have paid their respects to the brave soldiers who lost their lives fighting for ‘Country, King and Empire’ on 25 April 1915. Anzac Day 2015 marks 100 years since this tragic event and we remember our Anzacs through this special Anzac commemorative circulating coin.

Minted from 0.999 silver with selective colour. The premium collectable in The Spirit of Anzac coin programme. Each coin comes with an individually numbered certificate with more information about the Gallipoli campaign, written by New Zealand’s Governor-General, Lieutenant General The Right Honourable Sir Jerry Mateparae. A detailed replica of the circulating 50c coin. Worldwide mintage of 10,000.

Designed by renowned artist Dave Burke, the coin design features a New Zealand soldier and an Australian soldier brought together by the hardships of Gallipoli. The soldiers stand back to back with their heads bowed in respect and remembrance. Incorporated in the background of the design are mangopare patterns (hammerhead shark), patterns traditionally associated with warriors and symbolising strength, determination and an unwillingness to back down. The silver ferns represent New Zealand’s national identity and appear on the war graves of fallen New Zealand soldiers around the world. This stunning 1oz silver proof coin is a more detailed replica of the circulating 50c coin.