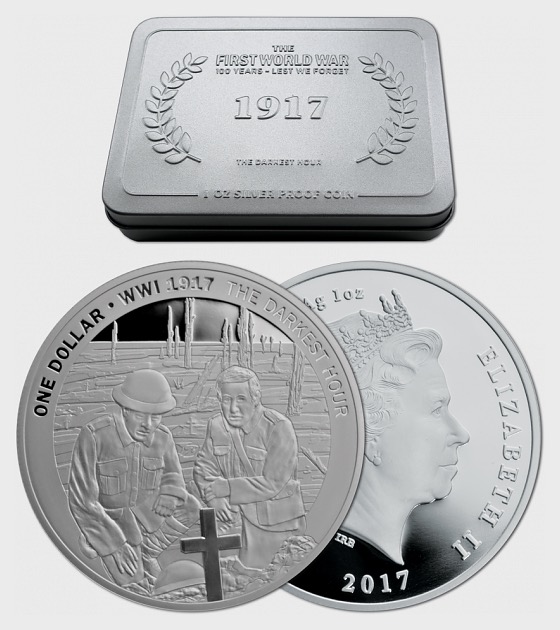 As the war continued its persistent trudge into 1917, New Zealanders began to grow weary of this great war that seemed to have no end in sight. New Zealand’s soldiers had battled their way through dismal living conditions, constant shelling and enemy fire to make their mark during the First World War. While small victories such as the taking of the Sinai Peninsula came as good news and seemed to boost the morale of those back home, the larger picture was still looking grim. New Zealand would experience the deadliest day in its military history when 845 lives were lost at the Belgian town of Passchendaele.

The 1917 commemorative coins depict Sling Camp, where many New Zealand soldiers wrote back home from; Passchendale, where New Zealand would experience the darkest day in its military history; and the growing role of artillery in this great war.

Minted from 0.999 silver. Limited worldwide mintage of 2,500. Coin comes in a pressed metal tin, made to resemble those gifted to soldiers in World War I by HRH Princess Mary at Christmas. Depicts the darkest day in New Zealand’s military history – 12 October 1917 at Passchendaele. The foreground of the coin shows soldiers by a makeshift grave, while the background features the decimated landscape. Collectable coin commemorating New Zealand's involvement in the First World War in 1917.

12 October 1917 was the deadliest day in New Zealand’s military history. The failed attempt to capture the Belgian village of Passchendaele resulted in 3,700 New Zealand casualties, including 845 killed. The failed offensive saw many of the casualties buried in unmarked graves. After the war the Tyne Cot Cemetery was built to memorialise these fallen troops close to where they had perished, along with other sites at Buttes, Polygon Wood and Messines. This coin depicts two soldiers paying their respects to a fallen comrade at a makeshift grave, with the desolation of the landscape in the background.