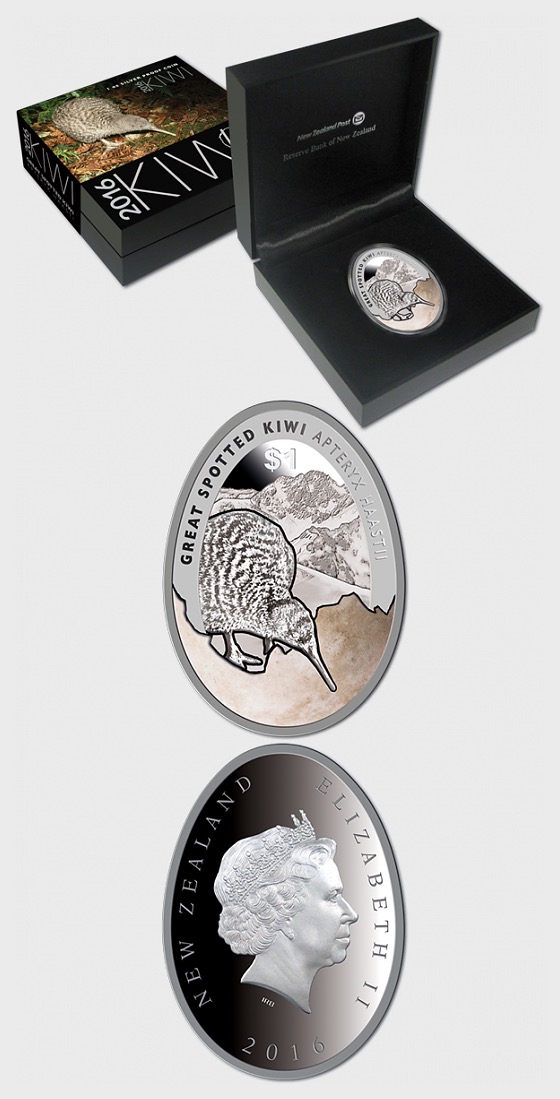 This unusually shaped coin reflects the great spotted kiwi’s quirks in more ways than one - as well as being shaped like a kiwi’s egg, the background of the coin shows Mount Rolleston in the Southern Alps, reflecting its preference for higher altitudes. The coin has also been printed in selective colour to replicate the colour and texture of the egg. The design features the scientific name of the kiwi, Apteryx haastii and even the obverse of the coin has been adapted to reflect the egg-shape of the coin.

Highlights
- New Zealand’s first egg-shaped coin
- Minted from 0.999 silver with selective colour
- Coin is printed with selective colour to mimic the appearance of a kiwi egg
- Features the great spotted kiwi depicted against Mount Rolleston in the Southern Alps
- Limited worldwide mintage of 2,500

The kiwi has been considered the mascot of New Zealand for many years, but despite our best conservation efforts, the numbers continue to decline year on year. Kiwi are mostly nocturnal, omnivorous birds whose closest living relatives are the Australian cassowary and emu, and like them, it cannot fly. The kiwi’s loose, hair-like feathers, long beak and large whiskers give it a scruffy, but endearing appearance.

The great spotted kiwi, also known as the roroa, can be found around the north-western part of the South Island. Sadly, numbers of great spotted kiwi have dropped drastically since New Zealand's colonisation, with only around 15,000 alive today. Unlike other kiwi, which tend to live in dense forests, the great spotted kiwi favours higher-altitude areas, making it difficult to reach for its natural predators (such as stoats, cats and dogs).

Accompanying the gold proof coin is the 1oz silver proof coin, minted from 0.999 silver and printed with selective colour. This $1 coin won’t disappoint and will make an excellent addition to any kiwi coin collection.