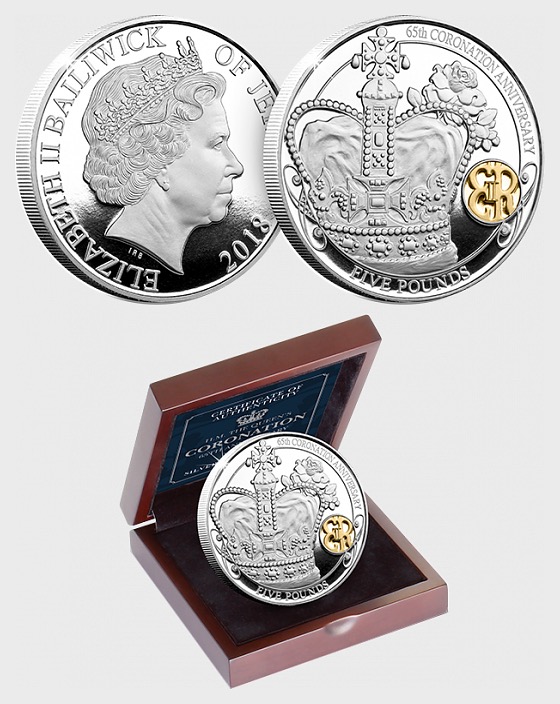 On the 2nd June 1953 at Westminster Abbey, Elizabeth was officially crowned Queen at the tender age of 27.

A staggering twenty million viewers from around the world watched the coverage. This year we celebrate 65 years since Her Majesty Queen Elizabeth II’s coronation, this makes her the first monarch in British History to reach this milestone.

During her reign, Her Majesty has broken many Royal records and it’s possible there may never be another monarch with such longevity. Her unwavering commitment to her country and the Commonwealth during the past 65 years has been quite astonishing.

Therefore, it’s only fitting that such a stunning coin has been issued to commemorate this anniversary. The British Isles Queen’s 65th Coronation Anniversary Silver Proof Five Pound Coin has been struck from fine Silver to a stunning proof finish and has been officially approved by Her Majesty the Queen.

The reverse design features the St Edward’s Crown, the centrepiece of the Crown Jewels, with a rose in the background. The EIIR monogram has been delightfully gold plated.

Your coin comes complete with a wooden Presentation Case and Certificate of Authenticity – absolutely FREE.

Royalty themed coins are always of great interest to collectors especially those celebrating the Queen and are a fitting heirloom to be passed on to children and grandchildren.

You can celebrate this historic occasion with this important new issue. Add The Queen’s 65th Coronation Anniversary silver Proof Five Pound Coin to your collection today.