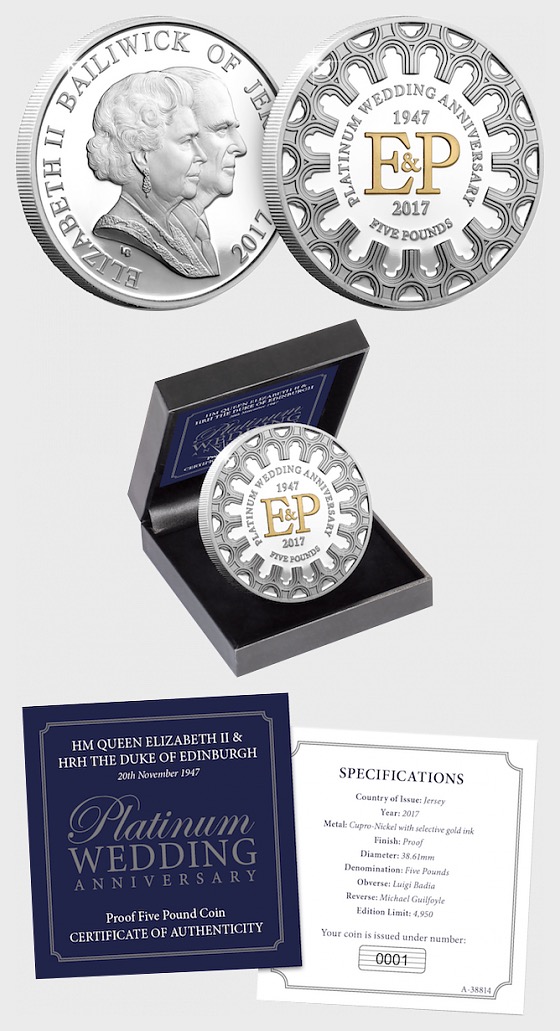 This year Her Majesty the Queen and HRH the Duke of Edinburgh celebrated the RAREST Royal anniversary EVER – their 70th wedding anniversary.

Celebrating a 70th wedding anniversary is incredibly rare. In fact it's so rare we've calculated as few as 60 people in the whole of the UK will celebrate theirs the year - that literally makes Her Majesty and the Duke of Edinburgh one in a million!

The coins obverse features a brand new, one-year-only double portrait of the Royal couple. Whilst the reverse design, selectively highlighted in 24-carat gold ink, is inspired by the north rose window of Westminster Abbey – where the Queen and Prince Philip were married in 1947.

Fully approved by Buckingham Palace, and the Queen and The Duke of Edinburgh themselves, this coin is finished to a pristine proof quality – the highest grade of finish found on collectable coins and comes presented in a deluxe presentation case with a numbered certificate of authenticity.

What’s more, it is limited to just 4,950 worldwide and considering the popularity of issues commemorating British royalty, demand for this issue is expected to be high. In fact, the previous two Royal Proof £5 coins issued to mark the Queen’s Sapphire Jubilee and her 90th Birthday with similar edition limits are now fully allocated, so we expect a full sell out for this issue.