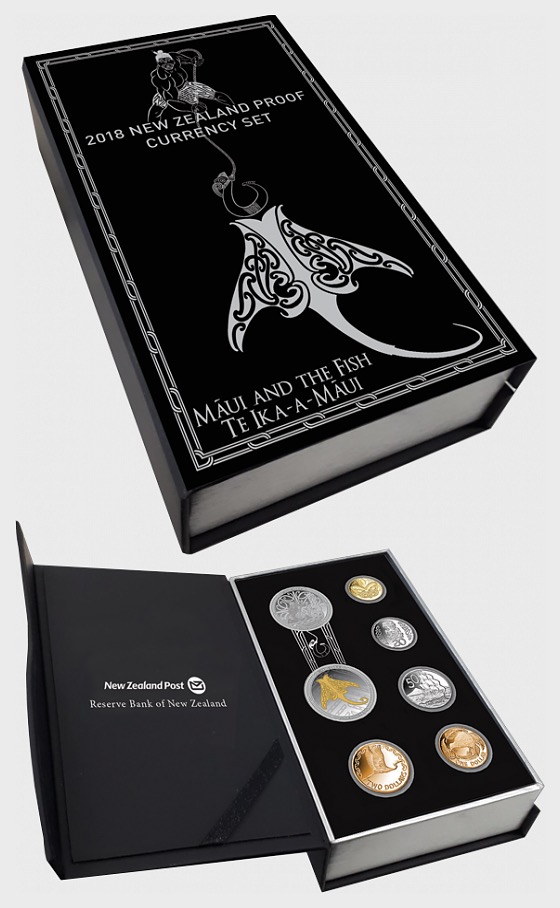 The 10-cent coin is the lowest denomination coin in New Zealand currency, and replaced the New Zealand shilling coin in 1967. As part of changes to New Zealand currency in 2006, the circulating coin became smaller and is now made of copper-plated steel. The reverse features a kōruru (carved mask) with heke (rafter) patterns.

The largest denomination of the original decimal coins, the 50-cent piece replaced the crown coin (five shillings) in 1967. Since its conception, the 50-cent piece has featured the HMS Endeavour on the reverse, the ship on which Captain Cook became the first Briton to reach New Zealand.

The New Zealand one-dollar coin was introduced in 1991 to replace the one-dollar note. The reverse features New Zealand’s iconic kiwi surrounded by silver ferns. The kiwi was promoted from its position on the 20-cent coin to bring to life the well known term 'Kiwi dollar'.

The two-dollar coin was introduced in 1991 when the two-dollar note was retired. The reverse features a kōtuku (eastern great egret, or white heron), which is held in high regard in Māori culture. Kōtuku are considered to embody rarity, grace and beauty and are considered inhabitants of the spirit world.

The set features proof versions of New Zealand’s circulating currency coins. Each coin is specially dated 2018. Collectively the coins feature many well-known New Zealand symbols such as the Māori carved mask, known as a ‘kōruru’ on the 10-cent coin, and the HMS Endeavour, the ship of Captain James Cook, on the 50-cent coin.

There are only 1,000 of these collectable sets available and each one comes housed in a beautiful display box to keep them in pristine condition.