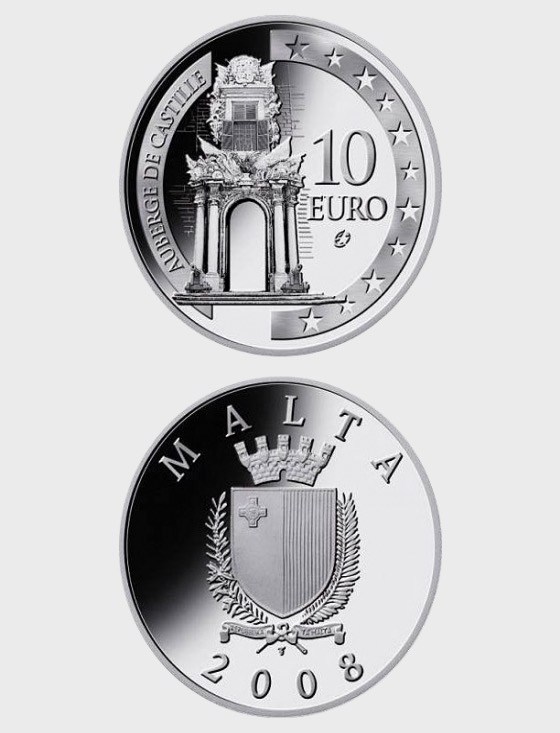 The obverse of the coins shows the emblem of Malta with the year of issue 2008. The reverse side depicts the porch of the Auberge de Castille.

When the Order of St John of Jerusalem transferred its headquarters from Birgu to the new city of Valletta after the Great Siege of 1565, it was quite natural that, after the completion of the city’s fortifications, the Order should see to the building of auberges or inns for the knights who belonged to each of its eight Langues. One of these inns was the Auberge de Castille, Leon and Portugal.

The design of the original building, which dates to 1574, was entrusted to Girolamo Cassar, the renowned Maltese architect then in the service of the Order. The chosen site was particularly conspicuous, situated on the highest part of the Valletta land-front with a commanding view of an extensive part of the island.

Subsequently, the Portuguese Grand Master Emanuel Pinto de Fonseca, who was fascinated by grandeur and had in fact included a closed crown in his coat-of-arms, considered the original building as unbecoming of the importance of his Langue and decided that it should be enlarged and embellished. According to the most recent research, the project was entrusted to the architect Andrea Belli and was completed in 1744.

The result of Pinto’s concept can be admired in the present symmetrical façade of the building, a fine example of baroque architecture and undoubtedly the most magnificent of the auberges. Particularly impressive is its portal, flanked by four columns and surmounted by a rich and varied trophy of arms and banners and topped with the bust of Grand Master Pinto. At present the Auberge de Castille, as it is popularly known, houses the Office of the Prime Minister.