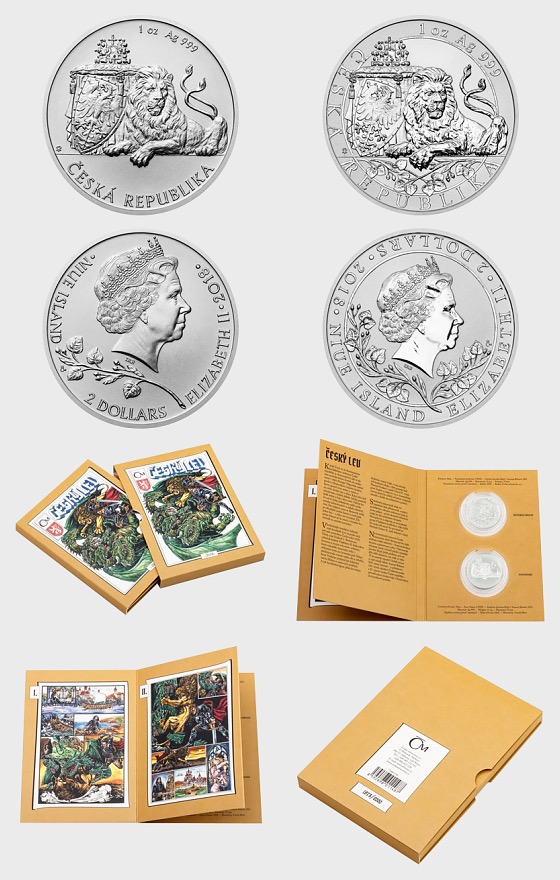 Investment coins, as their name implies, are mostly sought after by investors who know that a sophisticated portfolio can not do without precious metals. However, Czech lions - investment coins of the Czech Mint issued in a foreign license - can still boast an artistic and collectible value. That is why an extraordinary set of two ounce silver coins representing an original addition to the numismatic collection as well as a valuable gift originated.

The first mintage in the set is in the form of a classic investment coin called "Czech Lion" embossed in the quality "standard". The second mintage is then a special coin issued on the occasion of 2018 when we celebrate 100 years since the founding of Czechoslovakia and a quarter century since the establishment of the Czech Republic. Usually we do not meet a similarly significant jubilee, and this special coin has got an extra coat. Its relief has been embossed in a unique "reverse proof" design. This quality is the opposite of the usual "proof" design. It features a matte coin face and a mirror-glossy relief. This is the first mintage of that type which has come to the offer of the Czech Mint!

The extraordinary patriotic motif of the reverse side of the coins has a strong connection to our statehood. It presents a two-tailed lion guarding the St. Wenceslas crown and a flaming Saint Wenceslas eagle on the shield. In addition, the reverse side in „reverse proof“ design bears a pair of linden stroys and a modified circular composition. Circular composition and linden branches differ from each other also on the sides of the pair of coins. However, they have the common attributes of Niue Island (the portrait and the name of Queen Elizabeth II, the year of the issue 2018, together with the nominal value of 2 DOLLARS (NZD)), which provides the Czech Mint with a foreign license to coin its own coins. The relief of both mintages was made by Asamat Baltaev, DiS., who was inspired by Jaroslav Bejvl's original drawing.

Set of two coins comes in a special numbered packaging. Every Czech knows that the dominant heraldic animal of the Czech Republic is a two-tailed lion. But how did this exotic beast get depicted on the coat of arms of a country in the heart of Europe? It may be implied in a legend of Bruncvík, a mythical prince who left his sweetheart to explore the world and to seek honor and glory. When his ship wrecked on the shores of the faraway Africa, he helped the king of the animals defeat a vicious dragon. The grateful lion had accompanied him ever since and together they experienced many adventures… Asamat Baltaev recreated this old Czech legend as a comic story on the occasion of the centennial of Czechoslovakia and the 25th anniversary of the Czech Republic.