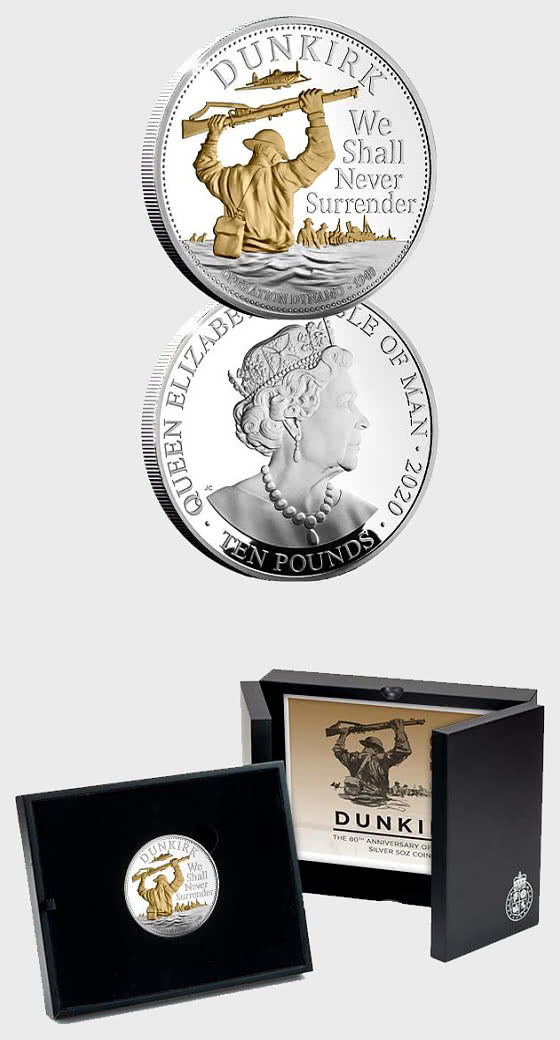 This brand new coin commemorates the 80th anniversary of Operation Dynamo, a ‘Miracle of Deliverance’ as declared by Winston Churchill, that so many British and allied soldiers were able to get home rather than surrender to the Nazi threat. The outcome of WWII and our lives now, could have been very different. Today, Dunkirk is a byword for determination and togetherness against diversity.

Remember their bravery – in the face of such overwhelming adversity

Fully approved by Her Majesty the Queen, the brand new Dunkirk 80th Anniversary Silver Proof 5oz coin is the perfect way to honour the memory of the heroic evacuation that has become a symbol of bravery and solidarity in Britain.

The impressive 65mm diameter has enabled the designer to create an image with a level of detail truly fitting for such an historic anniversary - one soldier, arms aloft, carrying his rifle overhead - sending the enemy a very clear signal, We Shall Never Surrender.

Finished to the highest quality possible, this brand new Silver Proof coin has been impeccably struck from 5oz of .999 Fine Silver and selectively plated in 24-Carat Gold which contrast’s beautifully against the pristine Proof Finish.

In fact, it’s the minute detail that dictates that this coin can only ever be a limited edition piece. It simply isn’t possible to produce something this detailed in large quantities. That’s why only 150 private collectors will own one.