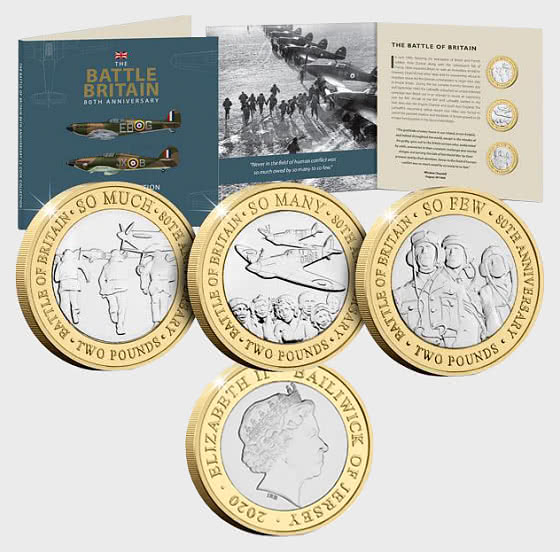 In speaking of one of the greatest chapters in our history – The Battle of Britain – Prime Minister Winston Churchill said:

The efforts of the skilled Battle of Britain fighter pilots staggers the imagination. Fought over British skies during 1940, the battle was a turning point in WWII and ultimately saved Britain from German invasion.

The Official Battle of Britain £2 Collection

Now, on the 80th anniversary, a brand new collection of THREE official Brilliant Uncirculated £2 Coins has been released to honour the event.

Issued by Jersey Treasury, each coin within this remarkable collection has been inspired by an excerpt from Winston Churchill’s speech – ‘Never in the field of human conflict was so much owed by so many to so few’, referring to the ongoing efforts of the RAF crews during this important time in our history.

Each coin, struck to a superior Brilliant Uncirculated quality, is presented in a stunning Battle of Britain 80th Anniversary presentation pack, making this a historically valuable piece to hand down to future generations.

Whether you're a £2 collector, military enthusiast, or you're looking for the perfect way to mark this important 80th anniversary - this collection ticks all the boxes and is a must-have for your collection.

The only way to own all three of these remarkable coins…

What’s more, this set is the one of the only ways you can own all three of these poignant Battle of Britain £2 coins, none will be available to own individually.

Interest in Battle of Britain 80th Anniversary commemorative coins has already been huge – this will be no exception. You must act quickly to secure one for your collection.

The Battle of Britain 80th Anniversary Brilliant Uncirculated £2 Coin Setprovides the perfect commemoration to the bravery of the few whose actions were pivotal to securing victory.