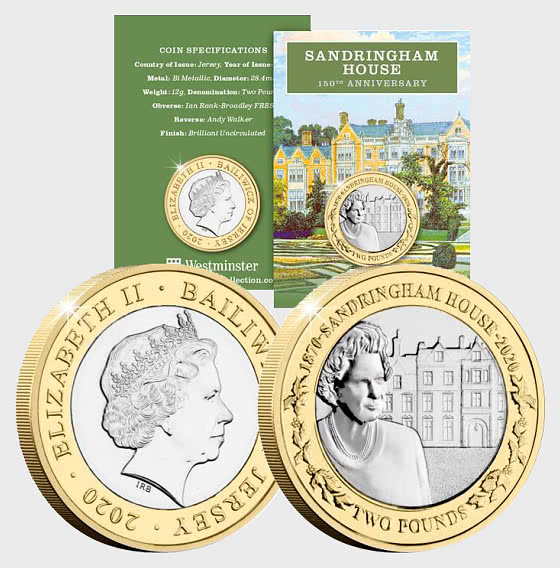 A brand new £2 coin has been officially released to mark the 150th Anniversary of Sandringham House.

Sandringham House is the private home of Queen Elizabeth II and is where, in 1957, Her Majesty broadcast the first ever televised Christmas message in British history.

It is best known for being the location where Her Majesty and the Royal Family spend time together over the Christmas period, and where the Queen resides from December until February every year, making it an important part of her annual calendar.

The cruel irony of the Queen’s new £2 Coin

For over 30 years, the Royal Christmas has been synonymous with Sandringham House in Norfolk. The Royals gather to exchange gifts and attend church, and it’s where the Queen makes her Christmas Day Speech.

So as the House marks its 150th Anniversary this year, it’s a cruel irony that COVID-19 means that the Queen and her family will probably not gather at Sandringham for the first time since 1988.

Nevertheless, Jersey Treasury has authorised the issue of a new £2 coin that features the Queen in front of her favourite Christmas residence to mark its 150th Anniversary.

And whilst the Queen might not be celebrating this Christmas at Sandringham in 2020, I’m sure it won’t stop Royal and £2 collectors adding this historic new issue to their collection. After all, collectors like an interesting back story…

Officially approved by Her Majesty the Queen the coin features a detailed portrait of Her Majesty with an illustration of Sandringham House in the background. The wording ‘1870 –Sandringham House – 2020’ is engraved around the design with two holly wreaths and the denomination.

This brand new £2 coin has been struck to a superior Brilliant Uncirculated quality, and is presented in a stunning Sandringham House 150th Anniversary presentation pack, making this a perfect addition for any collection.