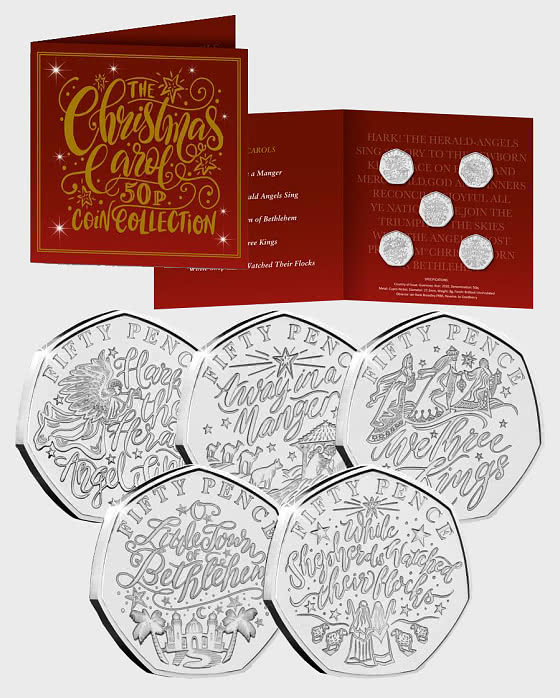 The tradition of singing Christmas Carols during the festive period dates back to the 19th century. It is believed that the Christmas carol service was invented in Truro by Edward White Benson, who later became the Archbishop of Canterbury.

Now, to celebrate this Christmas season, FIVE brand new coins have been authorised for release by Guernsey Treasury and fully approved by Her Majesty the Queen.

Each coin features a specially commissioned design of some of the most renowned Christmas carols including; Away in a Manger, Hark the Herald Angels Sing, O Little Town of Bethlehem, While Shepherds watched their flocks, and We Three Kings.

The coins have been struck to a superior Brilliant Uncirculated finish so are guaranteed not to have the marks and scratches seen on standard circulation coins.

Over the last few years new British 50p coins have launched a whole new generation of collectors, and these latest 50p coins have the potential to become some of the most sought-after 50p coins ever. Demand is expected to be very high.

All five coins are housed in a festive presentation pack and importantly, this is one of the only ways you can own all five coins as a complete set.