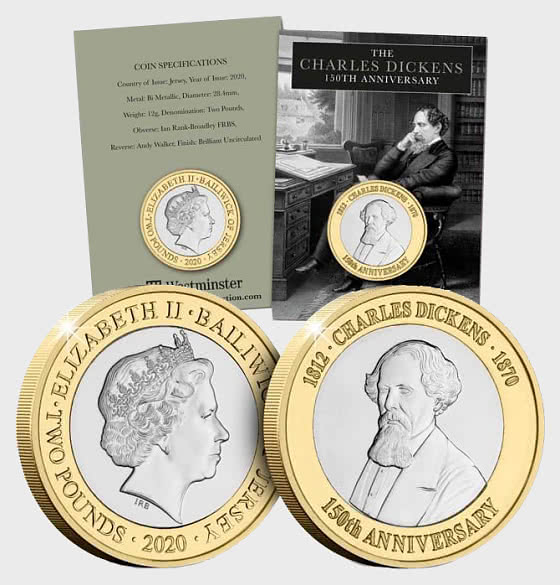 Charles Dickens is widely regarded as the greatest novelist of the Victorian Era, creating some of today’s best-known characters including Oliver Twist, Ebenezer Scrooge and Nicholas Nickleby to name just a few.

To mark the 150th anniversary of his passing, we are pleased to share with you a BRAND NEW £2 Coin that has been fully authorised by Her Majesty the Queen featuring the legend of literature himself, Charles Dickens.

This remarkable new coin, which has been issued by Jersey Treasury, features a stunning portrait of Charles Dickens by renowned illustrator Andy Walker, along with engraved text “1812 Charles Dickens 1870”. The obverse features the fifth portrait of Her Majesty the Queen, designed by Royal Mint engraver Ian Rank Broadley FRBS.

The coin has been struck to a Brilliant Uncirculated quality – a superior finish sought-after by collectors. This means that it will be free of any marks and scratches that you would find on circulated coins. It has also been protectively housed in bespoke Charles Dickens packaging, preserving its quality for generations to come.