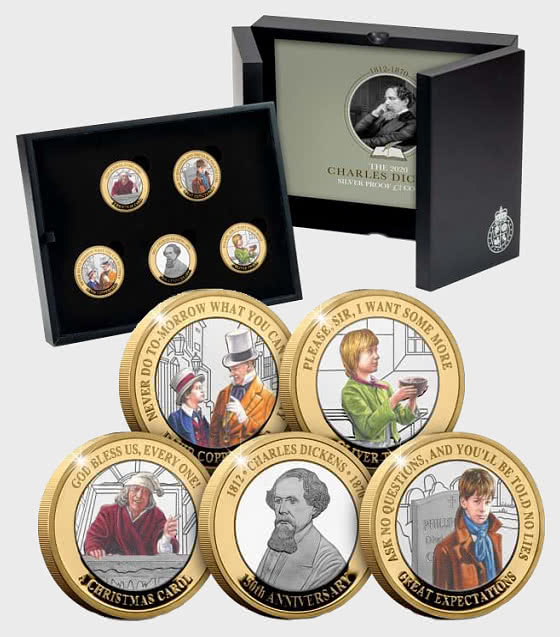 Charles Dickens is widely regarded as the greatest novelist of the Victorian Era, creating some of today’s best-known characters including Oliver Twist, Ebenezer Scrooge and Nicholas Nickleby to name just a few.

To mark the 150th anniversary of his passing, a BRAND NEW Silver Proof £2 Coin Collection has been authorised for release by Jersey Treasury and fully approved by Her Majesty the Queen.

This remarkable new Collection features FIVE new £2 coins, each of which has been specially struck from .925 Sterling Silver, with the addition of 24ct Gold-plating.

Designed by renowned artist Andy Walker, four of the coins feature full colour illustrations, depicting some of Dickens’ most famous works, along with iconic excerpts from the books. The set includes:

- Great Expectations “Ask no questions, and you’ll be told no less”

- David Copperfield “Never do to-morrow what you can do today”

- A Christmas Carol “God Bless Us, Every one!”

Most importantly, just 995 sets are available worldwide. An extremely low number given the worldwide recognition of Dickens’ novels and the fact that Silver coins are amongst collectors favourites.