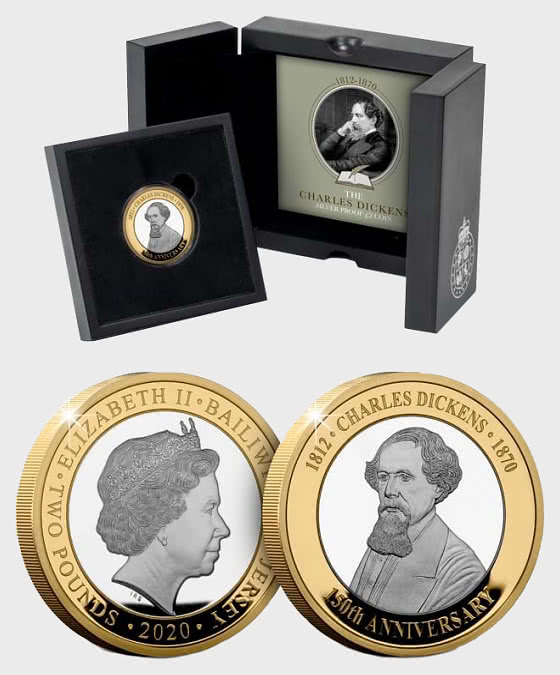 This year marks the 150th Anniversary of the death of Charles Dickens. Dickens is widely regarded as the greatest novelist of the Victorian Era, creating some of today’s best-known characters including Oliver Twist, Ebenezer Scrooge and Nicholas Nickleby to name just a few.

To commemorate the 150th anniversary of his passing, a BRAND NEW Silver Proof £2 Coin has been issued.

This remarkable new coin, which has been issued by Jersey Treasury and fully approved by Her Majesty the Queen, features a stunning portrait of Charles Dickens by renowned illustrator Andy Walker, along with engraved text “1812 Charles Dickens 1870”. The obverse features the fifth portrait of Her Majesty the Queen, designed by Royal Mint engraver Ian Rank Broadley FRBS.

The coin has been impeccably struck from .925 Sterling Silver with the addition of 24ct Gold-plating and finished to a stunning Proof Quality. Proof coins are individually struck with the punch hitting the blank several times to create the perfect, flawless “Proof” finish, and also creates maximum contrast between the frosted design and perfect mirror-like background of the coin.

Your coin has been protectively encapsulated and displayed in a presentation box, along with numbered Certificate of Authenticity, confirming the place in the strict 2,020 edition limit.