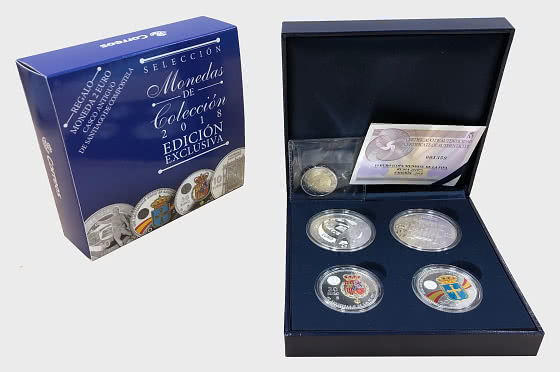 About Coin Collection 2018 - A selection of coins that represents some of the most momentous historical events of 2018. The FNMT makes a special jewelry box, with a specific design, chosen by Correos to contain the four coins, which are delivered with their corresponding certificates of authenticity. With the guarantee of the FNMT (National Factory of Currency and Stamp). The case contains the following coins:

1. 50th Anniversary of S.M. King Don Felipe VI On the obverse is reproduced the portrait of His Majesty the King Don Felipe VI. On the reverse, the coat of arms of His Majesty is reproduced. On the left at the top and within a circle appear, in the form of four-latent latent image, a real crown, the number 50, the number 1 8 and the mark of the Mint.

2. 1,300 Anniversary of the Kingdom of Asturias On the obverse are reproduced the effigies of His Majesty the King Don Felipe VI and His Royal Highness the Princess of Asturias, Doña Leonor de Borbón y Ortiz. The reverse reproduces in color the coat of arms of the Principality of Asturias on a ribbon with the colors of the Spanish flag. In the upper left part there is a circle that, in the form of a fourfold latent image, contains a schematic Cross of Asturias, the mark of Ceca, a royal crown and the number 18.

4. 800 Years of the University of Salamanca On the obverse is reproduced the portrait on the left of His Majesty the King Don Felipe VI, wearing the insignia of Captain General. On the reverse, an image of the Plateresque façade of the University of Salamanca building is reproduced. At the top of the coin, the name of this university with the corporate typography of this university center. On this occasion, only 8 real coins are certified. Limited edition 350 units

Offer available for 15 days or until stock lasts!