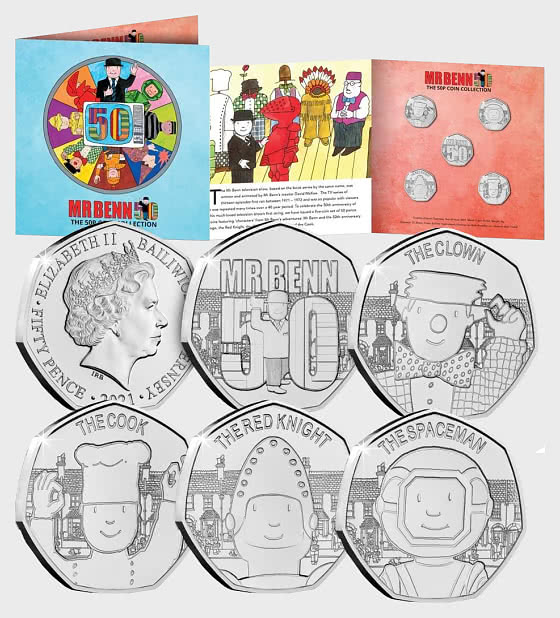 For a generation of children those words heralded the beginning of another magical adventure for Mr Benn.

Incredibly it’s been 50 years since the postman first arrived at No 52 Festive Road with Mr Benn’s invitation to a fancy dress party… and so started his first adventure. Since then Mr Benn has fascinated millions of children with his adventures as he walked through that magical changing room doorway.

Now to mark Mr Benn’s 50th Anniversary, a special set of five official British Isles 50p coins have been released by the Guernsey Treasury – just the sort of collection that Mr Benn would have been certain to “keep carefully just to remind me”.

Housed in a stunning presentation pack

Struck to the collector’s favourite specification, Brilliant Uncirculated Quality, these coins are free of any of the marks and scratches usually found on circulating coins. And what’s more, they come protectively housed in a nostalgic presentation pack, meaning your coins can be safely and securely presented for years to come.

This complete set is a must-have for anyone who grew up watching Mr Benn or who wants to pass on his magic to a new generation of children.

Importantly, this set is one of the only ways you can own all five of these 50p coins, only the Mr Benn 50p coin will be released individually.