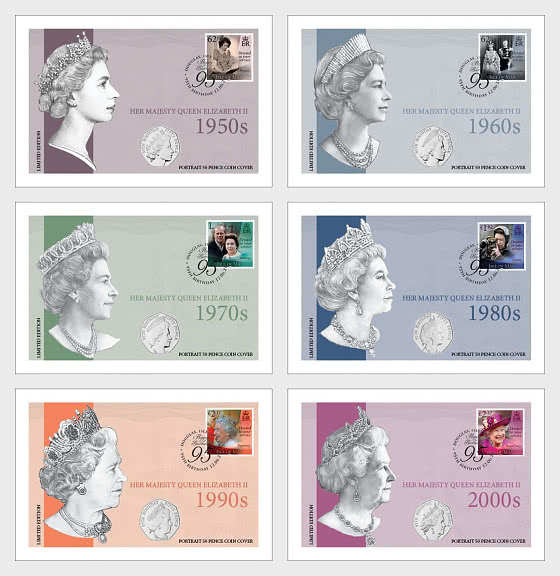 This year we mark one of the most important Royalty anniversaries of our lifetimes. Her Majesty Queen Elizabeth II marks her 95th Birthday, becoming the first monarch in British history to ever do so.

And now to mark this important moment, you have the chance to pre-order a BRAND NEW 50p Coin Cover before general release.

This collection contains SIX BRAND NEW 50p coins issued by Isle of Man to mark Her Majesty’s birthday, each featuring a specially commissioned portrait from a decade of the Queen’s reign.

And alongside these special coins are the BRAND NEW stamps from Isle of Man Post featuring images of Her Majesty throughout her life – the perfect tribute to this record breaking monarch.

And importantly, only 995 of these special covers will be released. And each cover has been numbered to confirm its position in the edition limit.

Each cover will be officially postmarked on Her Majesty’s official birthday – 12th June – guaranteeing the edition limit. Once they’ve sold out, no more will EVER be released.