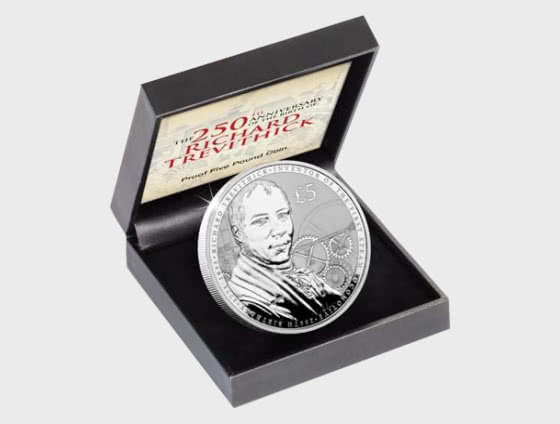 About GUERNSEY - The Richard Trevithick Proof £5

Richard Trevithick was a British engineer and inventor, and pioneered the use of high-pressure steam engines, which led to him developing the first ever working steam locomotive!

To commemorate 250 years since the birth of Richard Trevithick, a BRAND NEW £5 coin has been released.

Issued by Guernsey, the Richard Trevithick Proof £5 coin features a portrait of Trevithick himself on the reverse, and has been struck to that all important Proof finish every collector loves to have!

Coins in this specification are rarely struck to a Proof finish, and not only that, but this coin also has a strict edition limit of JUST 2,021 around the world! To put that into perspective, the 2004 Steam Engine £2 coin issued by the UK had a mintage of over 5 million!

Your coin will come presented in a Presentation Box alongside a numbered Certificate of Authenticity confirming your coins place within the strict, worldwide edition limit of JUST 2,021, and is encapsulated in a tamper proof capsule to preserve its Proof finish for years to come.