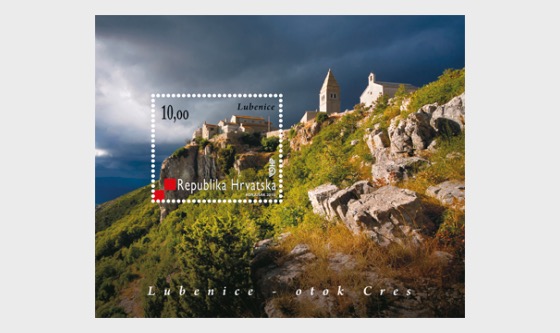 Motif: Lubenice - panorama Lubenice – a town of stone The power of the ancient myth, in which the main characters are Apsyrtus, Jason, Medea and the Argonauts, introduces us into the pre-origin of the group of islands called Apsyrtides, to which also Cres belongs. At cultural level, on the island Cres there can be noticed for centuries present interaction between the landscape and the evidence of very different peoples (Illyrians, Greeks, Romans and Venetians) who in their historic eras and within their own civilisations created a cultural and historical matrix of this region. The area of Lubenice and Pernat, called Gerbin (south-western wind) by local inhabitants, is bordered on its west side by the vast bay of Cres and by its position stands out as a separate micro-region of the island Cres. As concerns historic continuity here we find: settlements existing from the pre-historic period till today, settlements built next to cultivated soil and settlements of the scattered type, built at the seashore. A Roman Hibernicia/Hibernitia, i.e. medieval Ljubljenice, and today’s Lubenice, is a settlement existing in an unbroken continuity for over 4000 years, situated in the central part of the island, at 378 m above sea level, on the high cliff dominating the open sea of the Kvarner Bay. Lubenice, like other pre-historic settlements has used its geostrategic position during history in order to control the entire Kvarner Bay through the Big Gate. The castle of Lubenice falls under Venetian rule from 1409 to 1797 and remains urbis and logos, with the church seat and military garrison, for the inhabitants who escaped from the further away situated fields of Vransko Lake and the Pernat peninsula. The prosperity of Lubenice is reflected in the huge territory belonging to the community, from the Cape Pernat to Ustrine and from Orlec to Belej, including also the villages mentioned. The autonomous community of Lubenice was abolished at the end of the 15th century, when it – with all its territory - passes under the administration of the community of Cres. The flourishing, opulent period on the island at the end of the 17th century favours erecting of houses and sacral buildings also outside the castle, fortified for centuries. Die inhabitants of the peninsula Pernat, and also of Lubenice have always been economically oriented to agriculture, livestock farming and forestry. Among the particularities of the island Cres are the huge estates with vast sheep economies - the so called shepherd’s dwellings. Through the oval shape of Lubenice, elongated in the direction north-south, and beginning at the town square, there stretch three main winding paths (streets) leading into the medieval town space. In the far history Lubenice was fortified by walls from the east, that survive today in fragments while the south part of the settlement leans against a vertical, inaccessible cliff above seashore. In a bounded space, between the renewed south and the original north town gate, the morphology of the construction art of Lubenice is found, spanning from the traditional functional minimalism to the renaissance-baroque elements with rare Venetian additions. In the first plan of the small town, at the town square and dominating it, there is a parish church dedicated to Our Blessed Virgin Mary. Next to the edge of the square and the former town loggia a new bell tower was erected in 1791. At the south end of the locality there is a renewed gothic church of St. Anthony the Eremite and a small Romanesque church of St. Sunday. In the centre of the small town, next to the former rectory there stands a gothic church of St. Jacob (14th – 15th century). After the north city gate, at the town cemetery, there is a church of St. Stephen from the 17th-18th century. As for the housing itself, it uses all the elements of autochtonous and organic art of building, combined with the elements used in the continental littoral. In the beginning of 2005 Lubenice was included into the UNESCO World Heritage Tentative List. A somewhat anticipatory concept design of an eco-park in the Pernat peninsula (1988) by the scientist Marijan Vejvoda, with the dynamic idea of including Lubenice in it, a detailed project for the adaptation and reconstruction of the building heritage with the concept for the revival and shaping of a varied tourist offer with compatible contents (1955), an always greater engagement and continuous presence (since 1999) of the Centre for Sustainable Development – Eco Park Pernat - are all important indicators showing that Lubenice is no "island", and that the ideas of its full-scale revitalisation, supported by active participation of local inhabitants, will prudently and harmonically incorporate sociological, anthropological and architectural aspects in future, new concepts.