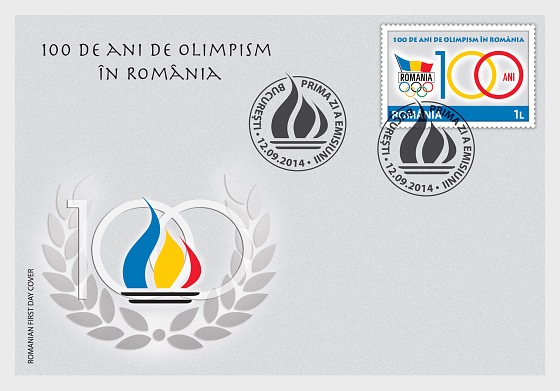 About 100 Years Of Olympism In Romania

Olympism is a philosophy of life, exalting and combining in a balanced whole the qualities of body, will and mind. (Olympic Charter)

Pierre de Coubertin, the founding father of the modern Olympics, supported the value of sports as a vector of dialogue between communities, promoter of peace, and supporter of fair competition beyond any form of discrimination and cheating.

Romfilatelia honours the Romanian Olympic Movement by introducing into circulation the postage stamp issue: “100 Years of Olympism in Romania”, consisting of a postage stamp and a souvenir sheet marking a century since our country has joined the international Olympic movement. The postage stamp of the issue with the face value of lei 1.00 illustrates the ROCS anniversary logo.

Over the years, the Olympic forum had 16 presidents, outstanding personalities of the moment, Lia Manoliu being the only woman who led the Olympic Committee in Romania, an appreciated presence both nationally and internationally. Lia Manoliu, a beautiful legend of Romanian sport, winner of the gold medal at the Summer Olympic Games in Mexico (1968) and bronze medal at the Summer Olympic Games in Rome (1960) and Tokyo (1964) in the discuss throw, participated in 6 consecutive editions of the Olympic Games (from Helsinki, 1952, to Munich, 1972), being the Guinness Book record setter for the longest continuous participation.

The first Romanian Olympic medal was won for Romania by the national rugby team, a bronze medal achieved in 1924 at the Summer Olympic Games in Paris.