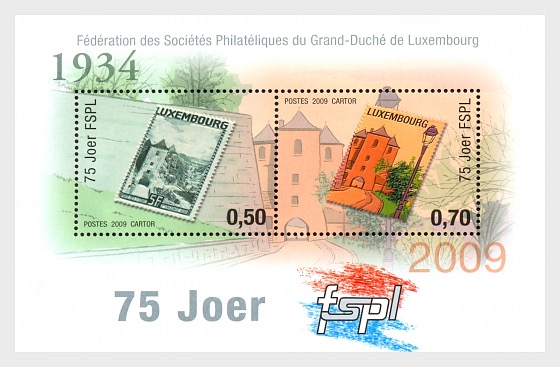 75th Anniversary of the FSPL - Miniature Sheet for only GBP £1.13

About 75th Anniversary of the FSPL

On February 22nd 1934 by-laws were signed, in accordance with the 1928 law, transforming the Luxembourg Federation of Philatelic Societies (FSPL) into a non-profit association. In the first article of these by-laws it was stipulated that the federation had been created de facto on Sunday, July 16th 1933 in Diekirch.
In 1934, the FSPL was made up of four member associations representing about 500 collectors. In 1946, there were 14 clubs with about 2,500 collectors and in the past few years the FSPL has been made up of 35 clubs with 2,200 adult collectors and 100 youths.
In 75 years the FSPL has succeeded in becoming the recognized spokesman for Luxembourg collectors, as much nationally as internationally.
The FSPL is directed by the Bureau Permanent made up of nine elected members, half elected every two years for a period of four years. Twice a year the presidents of the 35 clubs or their representatives meet in a General Council to discuss current business. Once a year, club delegates attend the National Congress of the FSPL, organized each year by a different club, where important decisions are made and also where elections are held every two years for the Bureau Permanent.