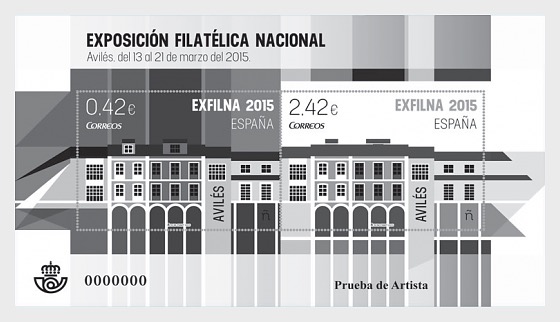 To mark the National Philately Exhibition, Exfilna 2015, to be held this year in Avilés (Asturias), we will issue a sheet with two stamps that include the letter "ñ", the logo of Brand Spain. The linear images depict a typical street in the old town, where the historic and artistic heritage includes arcaded streets and squares, churches and palaces that invite you to stroll through history, from the middle ages on.
Exfilna 2015 is organised by Grupo Filatélico Avilesino, with the collaboration and sponsorship of the Spanish Federation of Philatelic Societies (Fesofi), Correos, and other institutions. Collectors from some of the philatelic societies making up Fesofi take part in this fair, the most important of those held in Spain. This national federation includes more than 250 philatelic associations from all over Spain.
Exfilna 2015, now in its 53rd year, will also commemorate the 450th anniversary of the founding of Saint Augustine, Florida. This town, twinned with Avilés, was founded in 1565 by the explorer Pedro Menéndez de Avilés, who was born in the Spanish town.
A total of 139 collections will take part in the Competition Class, which includes all areas of collecting, divided into groups, as well as 19 Philatelic Literature contributions. A new feature in this edition is the participation of Italy as a guest country through the Federazione fra le Società Filateliche Italiane, with eight general collections and one Philatelic Literature collection. The Honour Committee will also be chaired by the new King and Queen of Spain, Felipe VI and Letizia.
The first National Philatelic Exhibition (Exfilna) was held in Madrid in 1963, and since then has been held every year in different Spanish cities and towns with ties to philately. This is the second time that Avilés will host the exhibition, after the event held in 2000.