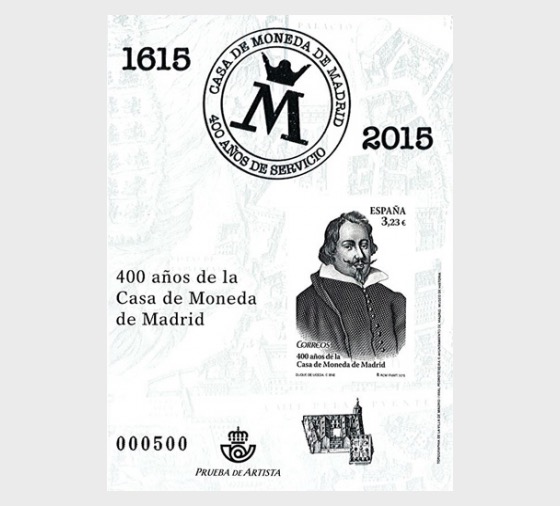 About 400 Years of the Madrid Mint (artist's proof)

For the 4th Centennial of the Mint (1615-2015), a miniature sheet is being issued that commemorates the establishment of this entity dedicated to producing coins and notes. For the background of the miniature sheet, the map of the Villa de Madrid (Town of Madrid) made by Pedro Teixeira in 1656 is being used. The stamp includes the portrait of the Duke of Uceda, the first director of the Mint.

The Mint of Madrid was founded by a Royal Decree from Felipe III on 18 February 1614. Its facilities were located on the calle de Segovia, at the foot of the current viaduct, where on 3 April 1615 the first 2 golden escudos and 4 silver reales coins were produced. Felipe III named the Duke of Uceda as the treasurer, with this title to be inherited by his line. Thus, the Madrid Mint was established, which coexisted with other mints in Spain and Spanish colonies until the peseta was introduced as the national currency.

The facilities at calle de Segovia in Madrid were in operation for almost 250 years, until a new industrial building was built in the Plaza de Colón, which was inaugurated by Queen
Isabel II in 1861. From the beginning, the building was shared with the Stamp Manufacturer. These two institutions, the Mint of Madrid and the Stamp Manufacturer were independent until 1893, when the Queen Regent María Cristina united them under the name of the Fábrica Nacional de Moneda y Timbre (National Mint, FNMT). Over the years, the facilities in the Plaza de Colón became obsolete and a new building was constructed on calle de Jorge Juan, the Mint's current headquarters, which was inaugurated in 1964.

Throughout these 400 years of history, the National Mint-Royal Mint has gradually innovated and adapted to new technologies and the necessary security systems. In addition to producing notes and coins, the Mint also manufactures postage, the Spanish National Identity Document, passports, and National Lottery, bingo and state betting tickets. In the 1990s, to allow for electronic commerce, the Mint developed cards with chips and the Spanish Electronic Certification service (CERES).