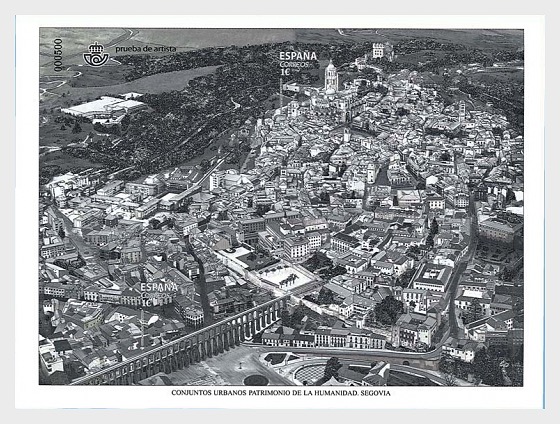 In 1985, the old city of Segovia and its Roman Aqueduct were added to UNESCO's list of Urban World Heritage Sites. This commemorative issue, printed using chalcography and consisting of a block sheet with two stamps, features an aerial view of the city. The stamps show the Santa María Cathedral and the famous Aqueduct.

The Medieval streets, the wall, the Alcázar, the Jewish quarter, the palatial houses, the monasteries and the numerous churches that dot the Segovian capital bear witness to its historic past and its rich heritage. Prominent among these important constructions is the Aqueduct, the distinctive symbol of the city. It was built in the late first or early second century and is considered to be one of the greatest works of civil engineering in Spain. It consists of 167 arches made of granite stone blocks held together without any mortar thanks to an ingenious balance of forces. Twenty-nine metres high at its tallest section, it was used to bring water into the city from the mountains.

Construction on the Santa María Cathedral, in late Gothic style, began in 1525 under the leadership of Juan and Rodrigo Gil de Hontañón. It is known as “The Lady of Cathedrals” for the grandiosity of its interior. Its layout is made up of three naves with a transept, a semicircular apse at the chancel and an ambulatory. The stained glass, the main altarpiece, the Baroque organs, the grillwork and the Neoclassical retrochoir are its most important elements.

The city is also home to the iconic Alcázar, perched on a rocky crag between the Eresma and Clamores rivers. It may have been built in the 11th century by Alfonso VI on the site of a Moorish castle. Centuries later it was expanded and embellished, becoming the favourite royal residence of the Catholic Monarchs. Its spires and slate roofs are reminiscent of Central European castles.

For centuries Segovia was a prosperous city due to the wool trade and cloth industry. Today is a site of historical and artistic interest and the setting for many cultural activities held throughout the year.