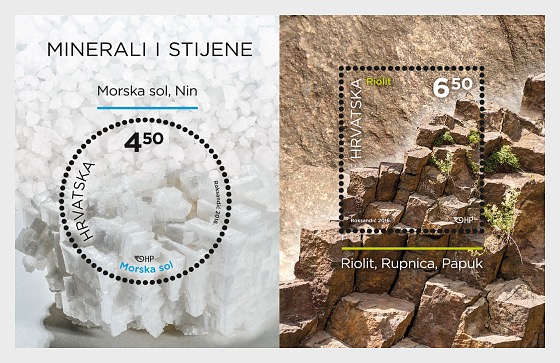 Minerals and Rocks - Miniature Sheet for only GBP £1.39

About Minerals and Rocks

Science which examines the origins and classification of rocks is called petrology while the minerals which build rocks are the subject of investigation of mineralogy. Rocks build the solid part of the Earth - the lithosphere, which encompasses the crust and the uppermost mantle and reaches to the depth of 100 kilometres. Beneath the lithosphere there is a 2900 kilometres thick mantle and further to the centre of the Earth, until the depth of 6370 kilometres, there continues the core. Rocks are aggregates of one or more kinds of minerals, while minerals are substances resulting from physical and chemical processes, which have a crystal structure and are stable at certain temperature and pressure conditions. Minerals are characterised by regular inner structure which is reflected also in their outer look and such regular forms of minerals are called crystals. By its origin rocks can be magmatic, sedimentary or metamorphic. About 95% of the lithosphere is composed of magmatic rocks, while the other two types share the remaining 5% of the lithosphere. Minerals (today there are more than 4700 known) are classified according to their chemical composition and structural features in 14 classes: pure chemical elements, sulphides, sulphur saults chalcogenides, oxides and hydroxides, carbonates, nitrates, borates, iodates, sulphates, phosphates, arsenates, vanadates, wolframites and molybdates, organic compounds and a large group of silicates which participate with more than 95% in the building of the Earth crust. Rhyolite (location Rupnica on Papuk, Croatia) The Nature Protection Act of the Republic of Croatia protects also non –living nature. This, first of all, concerns special geological and geomorphological areas which constitute the geological heritage of the Republic of Croatia. Eastern part of Croatia is a plane area which time ago was the bottom of the once here existing Pannonian Sea from which protruded islands - today’s Slavonic mountains. Among them especially prominent is Papuk, whose heterogeneous magmatic and metamorphic rock complex was affected by considerable geological changes. In the relatively small area three kinds of rocks can be found whose age is dated from Precambrian (rocks older than 600 million years) until today. At the location Rupnica various varieties of rhyolite, andesite, basalt and tuffs can be found. According to some authors they are more than 70 million years old (Upper Cretaceous) while according to some other they are “much younger” and their age is estimated at 16 million years (middle Miocene). It is a geological monument of nature in the valley of the creek Djedovice along the road Voćin – Kamenska. Special importance has rhyolite - a sour effusive rock of grey to green colour built mostly from the minerals quartz, feldspar, mica and amphibole. It is of porphyric structure with holocrystalline granular base. Although volcanic rocks are most often massive and compact, because of heterogenic composition of magma there can appear in them cracks which divide blocks in various sizes and shapes. This process is called cleavage, and it is a consequence of magma cooling, which causes shrinking on the surface and regular rock cracking. The importance of the mentioned location is in its special geomorphological phenomenon of prismatic cleavage – regular cracking of the albite rhyolite from Rupnica in the form of four-sided and five-sided columns, which is also a consequence of cooling of lava in contact with sea water. Already in 1948 the location was proclaimed first Croatian geological monument of nature and from 2007 it has been a part of European and UNESCO World Network of Geological Parks - areas with specific geological heritage and sustainable development strategy. Dragan Bukovec