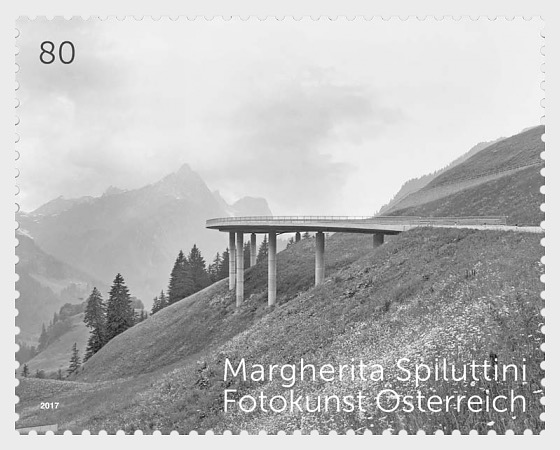 Margherita Spiluttini - Set for only GBP £0.73

One of Austrias best-known photographers, the artist from Salzburg, Margherita Spiluttini, is being presented on a commemorative stamp in the "Photographic art in Austria" series. The stamp shows a black and white photograph of the Hochtannberg in summer from the year 1992, a barite print bonded to aluminium.

The photograph comes from the "Beyond Nature Construction of Landscape" project from 1991 to 2003. It is "about the ambivalence between the poignant beauty of the mountains and the oppressive threat which can emanate from them. About what is created when mankind wants to overcome, master and exploit the enormity and impassibility of the mountains and how the mountain?s "surface" is changed by this." Works from this series have been put on show at the Architekturgalerie in

Lucerne, the Technisches Museum, Vienna and the Fotografins Hus in Stockholm, among others. Margherita Spiluttini was born in 1947 in Schwarzach in Salzburg, and, having finally been confined to a wheelchair by multiple sclerosis, worked as a freelance photographer from 1981 to 2014. From 1998 to 1999 she taught at the University of Applied Arts in Vienna, and thereafter worked as a visiting professor at the University of Arts and Industrial Design in Linz. For many years she was a member of the Board of the Vienna Secession. In 2006 the artist, who lives and works in Vienna, was awarded the Austrian Cross of Honour for Science and Art and in 2016, the Austrian State Prize for Artistic Photography.

She came to photography through her job as a medical technology assistant at the general hospital: "My first photographs were radioactive and radiological interior shots of the human body", said the artist in an interview for the newspaper "Der Standard" upon being awarded the State Prize in 2016. Landscape photographs, heavily influenced by her father?s work as an architect, were soon followed by architectural pieces. "For me architectural photography is nothing more than taking attentive notice of the world around you. I perceive architecture in a sociological manner as a representation of mankind. " Eventually her illness made continuing with her photography impossible, and the artist began working on her archive, which includes around 120,000 slides and negatives. In 2015 she donated her photographic archive, which documents over 4,000 buildings and objects, to the Architekturzentrum Wien.

In her approach, Margherita Spiluttini constantly blurs the borders between applied and artistic photography. The architectural and landscape photographer focusses on the dramatic dialogue between nature, architecture and technology in her work, reflecting on human intervention in the environment through pictures composed of lines and colours, which she often terms "ornaments". Her pictures have repeatedly been published in specialist journals, books and exhibitions.