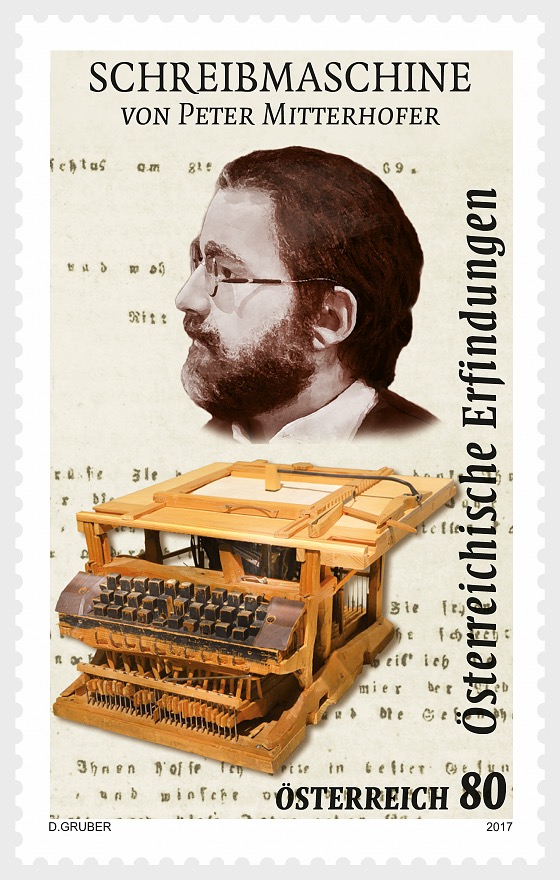 In the "Austrian Inventions" series, Austrian Post is this time celebrating Peter Mitterhofer, who made the first typewriter in the 1860s, with a commemorative stamp.

Peter Mitterhofer was born in 1822 in Partschins in South Tyrol. After learning the craft of a carpenter and cabinet maker in his father?s workshop, he set off on his "Walz" - the educational travels of young craftsmen - and spent many years travelling through Austria, Germany, France and Switzerland. During this time he was not only able to develop his expertise, but his musical talent also proved to be of use. He composed amusing verses and accompanied them on various musical instruments, some of which he made himself, such as the "Hölzerne Glachter", in which small hammers struck tuned wooden panels and which may very well have been the inspiration for later devising a machine for writing.

In around 1860 Mitterhofer returned to his homeland, where he worked as a carpenter and a cabinet maker. His curious inventions and ideas led many to consider him an oddity, and his entertaining musical performances resulted in repeated conflicts with the village priest. In 1862 he married Marie Steidl and took over the carpenter?s shop that the widow brought to the marriage. Until his death in 1893, one year after his wife passed away, Mitterhofer lived in a small farmhouse in his home town of Partschins.

Between 1864 and 1869 Mitterhofer built five typewriters, four of which have survived to this day. The first two models were mainly made of wood, the later models made of typesetting metal. The model shown on the commemorative stamp, the "Wien" model from 1864, can today be seen in the Technisches Museum in Vienna. The last of his typewriters from 1869 already had automatic line spacing, and was able to produce both upper and lower case letters and special characters. In 1866 and 1869 Mitterhofer presented two of his models at the Imperial court in Vienna. On each occasion he received a financial contribution, but did not receive support for developing them further. As a result the inventor lost interest and returned to his home town, where he stored the typewriters in the attic. They were only rediscovered after his death.

At about the same time as Mitterhofer was working on this, Christopher Latham Sholes patented a mechanical typewriter in the USA, which was the first such machine to have the still standard "QWERTY" keyboard. He sold his invention to the company Remington, which began mass-producing typewriters from 1873 onwards. Like many other innovative spirits, Mitterhofer, who also invented a washing machine, a portable wheelbarrow and many other tools, failed to achieve recognition for his
efforts during his lifetime. His gravestone bears the phrase "The others, who learned from him, were able to reap the fruits of his talents.