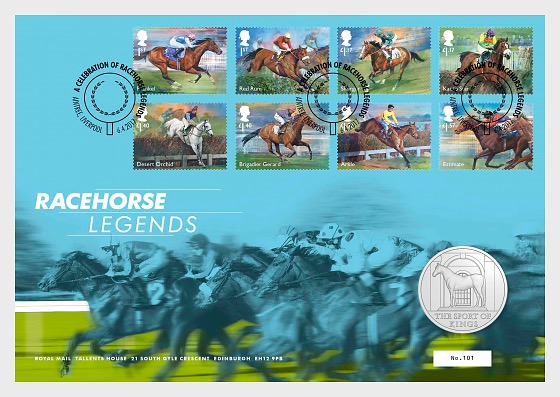 If you ask any race goer or commentator to come up with their list of the eight horses that have most captured the imagination of the British racing world in living memory and that fully deserve the status of legend, you are likely to generate a lot of passionate debate but fail to get a consensus. Whilst there are notable absentees from the list of horses we have selected for this stamp issue such as Mill Reef, Dancing Brave and Night Nurse amongst others we are confident that the ones we selected in consultation with Great British Racing and Racing Post have captured the imagination of racing and non-racing fans and truly merit the title of a racehorse legend. Horse racing is the UK’s second biggest spectator sport, with around 5.5 million attending horse racing events around the country each year. 13,700 horses are in training at any one time and the industry contributes £3.4bn annually to the economy. Its popularity has endured for centuries and it now attracts extensive coverage on TV, radio and newspapers.

The eight stamps that comprise the set feature horses which have all in their own unique way created a piece of history in British horse racing. These include the legendary Red Rum who won the Grand National on three occasions and the indomitable Frankel who remained unbeaten in his 14-race career. Whilst not all of the horses featured were born and reared in Britain, such is the global nature of the modern ‘Sport of Kings’, they have all achieved greatness by winning one or more of the UK’s most prestigious races.

The sport is thought to have been brought to Britain in the first century AD during the Roman occupation when soldiers used to organise races on horseback as a means of entertainment. Kings and queens were amongst those who enthused about horse racing including Charles I who introduced the first-ever Cup Race, known as the Gold Cup, and also Queen Anne whose passion for the sport led to the founding of Ascot Racecourse.

Traditionally, horses were ridden over a specific distance on flat ground only but during the 18th century the racing of horses involving the jumping of fences and hurdles was introduced, an activity that was to become known in the UK as National Hunt.