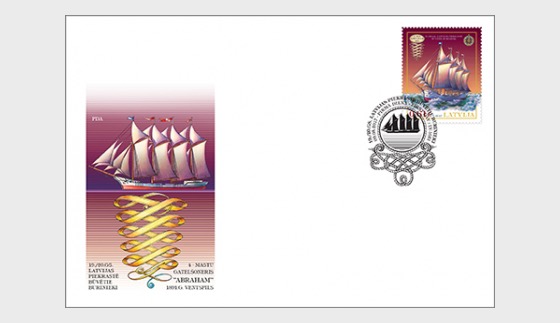 Latvijas Pasts has released a stamp in the series Historical Ships of the 19th Century which is dedicated to the four-masted gaff schooner Abraham built in Ventspils. The first day cancellation of the stamp is scheduled to take place in the Post Centre Sakta, 32 Brīvības Boulevard, Riga from 8 AM to 7 PM on Tuesday, the 9th of May 2017.

The second stamp in the series of ships features the four-masted gaff schooner Abraham built in Ventspils in 1891 by the famous Latvian shipbuilder Mārtiņš Morgenšterns. Abraham sailed in the nearby seas and also made transatlantic voyages, but it was wrecked in the Gulf of Mexico in 1897. The ship was repaired in a US port, but due to the high cost of repairs it was later sold at a cheap price and included in the US fleet.

Latvijas Pasts launched the series of stamps Historical Ships of the 19th Century in 2016 in honour of the period of the rapid development of Latvian seafaring and shipbuilding in the 19th century. The first stamp in the series of ships features the sailing ship Andreas Weide, which was built in Ainaži in 1891.