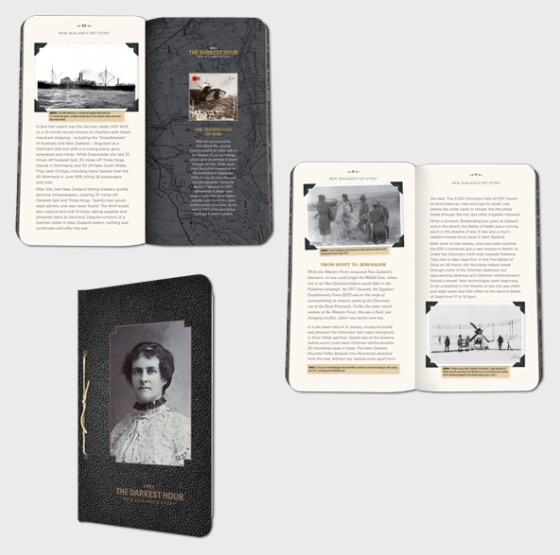 By 1917, soldiers and loved ones had begun to lose faith in the ongoing war. Those on the Western Front were living in cold, wet trenches, and those at home were doing what they could to keep the home fires burning. New Zealand would experience the deadliest day in its military history when 845 lives were lost at the Belgian town of Passchendaele.

As the war continued its persistent trudge into 1917, New Zealanders began to grow weary of this Great War that seemed to have no end in sight. Those on the Western Front were living in cold, wet trenches, and would experience the deadliest day in New Zealand’s military history when 845 lives were lost at the Belgian town of Passchendaele.

Alongside the horrors of the Western Front, we tell the story of mother of ten Ellen Knight. Like many mothers, wives, sisters and daughters she experienced the war from New Zealand shores, relying on letters from loved ones and news reports to stay informed. However, Ellen’s story was grimmer than most – she had lost three sons by the war’s end.

Ellen Knight of Dannevirke, mother of ten, saw three of her boys killed during the First World War: Herbert, shot dead by a sniper at Gallipoli in 1915; George, killed at Passchendaele in 1917; and William Douglas, her eldest, felled by a shell in France in 1918.

Beginning with the Battle of Rafah in January and ending at the Battle of Jerusalem in December, 1917 saw New Zealand mounted soldiers help capture the Sinai Peninsula from Ottoman forces before pushing into Ottoman Syria.

George Knight would arrive at Sling Camp, Salisbury Plain, England in January 1917, one of around 4,000 troops at the camp at any given time. While training new recruits was its primary purpose, Sling also served as a recovery and reconditioning stop for soldiers returning to the front.

Tasked with removing the Germans from Messines Ridge in Belgium to clear the way for the later assault on Passchendaele, New Zealand soldiers would initially achieve most objectives with minimal losses. German guns would recover, however, and as the New Zealanders were relieved on 9 June many would be killed on their way back from the front.

A merchant ship carrying war supplies, the SS Port Kembla, was sunk by a German mine just 17 kilometres off Farewell Spit in September 1917. Reports suggested an engine room explosion was responsible, ensuring that New Zealanders were unaware of how close the war had come to their shores.

Tanks made their first failed appearance on the battlefield in September 1916, but by the time this tank was photographed during the Battle of Messines in 1917, refinements in design were beginning to have some impact. By the end of 1917 tanks were being deployed in great numbers.

During the war New Zealander Harold Gillies, pictured far right, would become a pioneer in facial reconstruction, successfully lobbying for the creation of a specialist facial plastic surgery hospital, The Queen’s Hospital, which opened in Kent in 1917.

The deadliest day in New Zealand’s military history, 12 October 1917 saw 845 lives lost at the Belgian village of Passchendaele. Post-war the Tyne Cot Cemetery would memorialise these fallen troops close to where they perished, alongside other sites at Buttes, Polygon Wood and Messines.

The temperance movement, conscientious objection, mining unrest and shipping strikes all had their day during the First World War. Arguably none had a greater impact on the population at home than six o’clock closing, introduced by temperance supporters as a wartime measure to “retain productivity”.

This photo shows the changing nature of New Zealand’s clerical workforce during the late war years. Nearly 60,000 men had left for overseas by 1917, and the country looked to women to fill varied commercial and professional roles left empty, or to ‘keep them warm’ until the men returned.

The story of Ellen Knight and New Zealand’s role in the First World War throughout 1917 is told in greater detail in the commemorative book. The book is the fourth in a series of five and expands in depth on the story behind each stamp in this issue as well as supplying a more detailed glimpse of life during the War in 1917.

This commemorative book edition tells the story of Ellen Knight and follows the paths of some of her children abroad and back home. Ellen’s son George tells of his time in Sling camp in letters back to his mother describing it as “this other last place on earth”, he later writes to his mother to tell her he has been promoted to company commander after the Battle of Broodseinde. His sister meanwhile had joined the workforce back home as had many women.

The emerging technology of war, the development of plastic surgery and the sinking of a supply ship in New Zealand waters are also explored and expanded on in this commemorative book. This unique collectable contains twelve miniature sheets that will not be available individually. There are still limited numbers of the 1914 For King & Empire commemorative book, the 1915 The Spirit of Anzac commemorative book and the 1916 Courage and Commitment commemorative book, there’s still time to collect the full set!