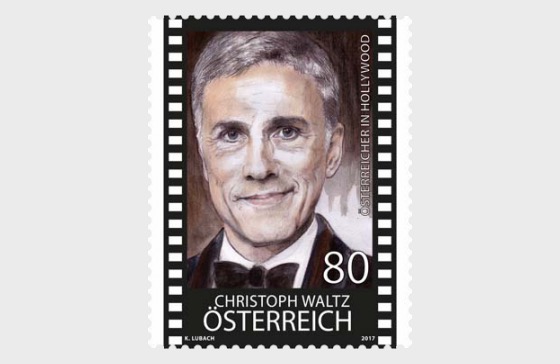 “We’ve got an Oscar!” was the enthusiastic reaction here in Austria in 2010 when Christoph Waltz, undoubtedly one of the best known and most successful “Austrians in Hollywood” today, received the much-coveted golden statue for the first time. Austrian Post is now dedicating a commemorative stamp in the series of the same name to him.

Christoph Waltz was born on 4th October 1956 in Vienna and grew up there. His parents were costume and set designers and his grandmother an actress. As his father was German, Christoph was granted German citizenship, but in the course of his successful career he was also awarded Austrian citizenship in 2010. Waltz studied acting at the Max-Rainhardt Seminar in Vienna and the Lee Strasberg Theatre Institute in New York. From the end of the 1970s onwards, he appeared in many German language and international theatre and television productions,
including the last episode in which Siegfried Lowitz played the “Alte”, Waltz being the one who shot the inspector. In 1996 he played Roy Black in the film adaptation of the singer’s life and was awarded the Bavarian Television Prize for his part. In 2000 Waltz made his directorial début with the television production “Wenn mann sich traut”.

He finally got his big break in the film mecca of Hollywood in his fifties, playing the role of SS-Oberst Hans Landa in the Quentin Tarantino film “Inglorious Basterds”, for which he won the best supporting actor Oscar in 2010 – the first German speaking actor to do so since Maximilian Schell in 1962. Just three years later, he won his second Academy Award for his next Tarantino film, “Django Unchained”. For both films he was also awarded the Golden Globe, the SAG Award, a BAFTA and count- less other awards, and in 2011 he received the Austrian Cross of Honour for Science and Art. Since appearing in these films, Christoph Waltz has numbered among Hollywood’s greats, also starring as the villain in the James Bond epic “Spectre’” (2015) and as Cardinal Richelieu in the 2011 version of The Three Musketeers. Waltz is also the only actor to date to have won an Oscar for a role in a Tarantino film.

Christoph Waltz is fluent in German, English and French, and this, along with his slight Austrian accent, meant that he was predestined to play roles for which English is not the mother tongue. In both his role in “Inglorious Basterds” and that in “Django Unchained” he also speaks German. His film characters are often ambivalent, vain and complex, but charming and well-educated, and he has also been able to display his talent for comedy.

In 2014 he was given a star on the famous “Walk of Fame”, and he is a popular guest on American talk shows. What is more, Christoph Waltz shares a step-father with Michael Haneke, another famous Austrian in Hollywood.