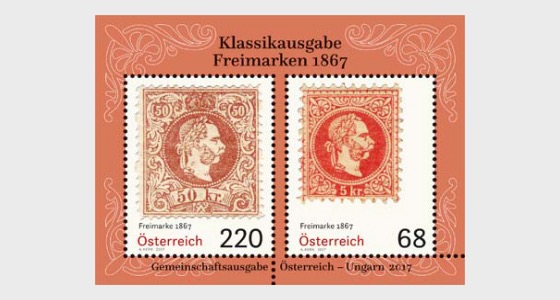 About Postage Stamps From 1867

The year 1867 was a significant interlude in the history of the Hapsburg monarchy. The Austro-Hungarian Compromise converted the Austrian Empire into the dual monarchy of Austria-Hungary, and that, of course, had an impact upon the postal service. The postage stamp issue of 1867 reflects this circumstance.

Thanks to the constitutional real union, Hungary was now an independent state with equal rights, while the same monarch, Franz Joseph I, reigned as the Emperor of Austria and the Apostolic King of Hungary. As a result, from 1st May 1867 onwards, Hungary had its own independent postal administration. However, the postage stamp issue of 1867 is an identical issue which was used by both postal administrations. The denomination “Kr” for Kreuzer or Krajcczar was appropriate for both countries. This postal series was issued on 1st June 1867 in denominations of 2, 3, 5, 10 and 15 “Kr.” for Hungary (which also included Transylvania). In the Austrian Empire it only became available once all of the previous postage stamp series had been used up. The 25 and 50 Kr. denominations were issued on 1st September 1867. The stamps were valid in Hungary (“Transleithanien”) until 31st July 1871 and in the Austrian “Cisleithanien” until 31st October 1884.

As for the 1860 issue, the postage stamps issued in 1867 once again showed the Emperor’s head turned to the right, but now with clearly distinguishable facial features. The depiction of the imperial bust is framed by a beaded circle, which is surrounded by curved ornaments. The denomination is printed below the design. The design for the 50 Kreuzer stamp differs significantly from the other denominations.

The stamps were printed on counter sheets of 100 stamps or 80 stamps in the case of the 50 Kreuzer stamp, both counter sheets bearing a watermark. They are differen- tiated by “coarse” or “fine” printing: until the end of 1874 a relatively thick, rough paper was used, with the coarse character being produced during printing through use of a textile underlay on the counter roller. From 1874 onwards a thinner, smoother paper was used. In the case of the 5 Kreuzer stamp there are also two different types: type II came into being from 1872 thanks to the use of a new die. Within types I and II a finer distinction is also made between variants a and b, based on different print details.

“Fine printed” type II stamps are thus only available in the Austrian issue, since the Hungarian stamps had been in circulation since 1871. 1867 stamps which were used in Hungary are especially popular with collectors due to the very short period for which they were valid. Furthermore, in the case of the fine printed 1867 stamps, there are many variations in perforation.

The current block of stamps from the “Classic Editions” series, a joint issue with Hungary, shows a brown 50 Kreuzer stamp and a type I coarse printed 5 Kreuzer stamp in a reddish colour.