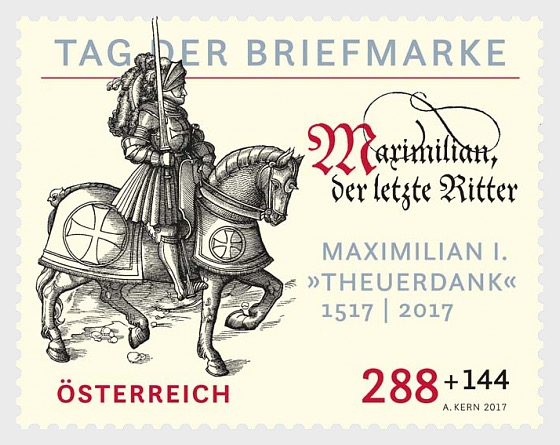 This year's design for the commemorative stamp for the Day of the Stamp is dedicated to the “last knight”, Emperor Maximilian I. His epic poem Theuerdank, dating from the year 1517, is an important exemplar of the art of early printing. Once again, the supplement charged on this stamp will be used to promote philately. Maximilian was born in the Lower Austrian city of Wiener Neustadt – which is why, to celebrate its 50th anniversary, the Hirtenberg philatelists’ association, which also hails from Lower Austria, was entrusted with organising the Austrian philatelic event ÖVEBRIA 2017. Maximilian I (1459–1519), of the house of Habsburg, became the emperor of the Holy Roman Empire in 1508, although without being crowned by the Pope, after already having been elected King of the Romans and becoming ruler over the Austrian hereditary lands following the death of his father Frederick III. Maximilian was very well-educated and took a great interest in science and in classical traditions of chivalry such as tournaments and the medieval literature dedicated to chivalric heroes. He deliberately presented himself as a knight, including through poetic works such as Theuerdank or the Weißkunig, in which he recounted episodes from his life in an idealised manner. Maximilian was responsible for the idea behind these works and collaborated in the writing. However, the content was revised and they were edited by his advisors, such as his secretary Marx Treitzsaurwein and the Provost Melchior Pfintzing, the latter also adding a so-called clavis, a glossary of people and events. In its rhyming verses Theuerdank gives a fictitious account of Maximilian's journey to win over his future bride, Mary of Burgundy: Knight Theuerdank sets off to find his bride Ehrenreich and undergoes various adventures during his journey, in which he must prove himself in the classic chivalric manner. The allegorical epic is divided up into 118 chapters, each of which is introduced by an artistic woodcut which illustrates the knight's experiences in a very detailed and vivid manner. The woodcuts were crafted by famous artists of the time such as Hans Schäufelin, Hans Burgkmair or Leonhard Beck. When it came to printing the work, Vinzenz Rockner, an employee in Maximilian's chancellery, devised a unique font which is today considered a forerunner of the German Gothic script. This font, with its artistically curving letters, was based on the script used in the court chancellery but adorned with extra curlicues. The first edition of Theuerdank was printed in 1517 by the imperial court printer Johann Schönsperger the Elder in Nuremberg with some coloured woodcuts. Around 40 copies were printed on parchment as editions de luxe, and another approximately 300 on paper. The first print edition was followed by a further eleven print versions, the last in 1693, with some variation in terms of content due to modernisation of the language and revision.