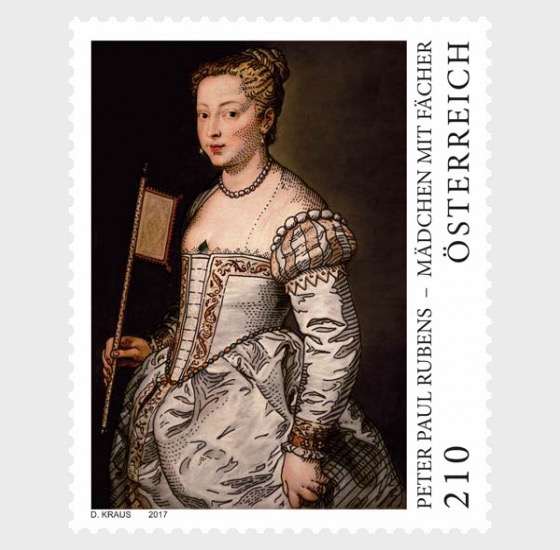 The great Flemish Baroque painter Peter Paul Rubens (1577-1640) studied the “Old Masters” throughout his life. They were his role models and his inspiration. He copied and interpreted them in his own way in order to learn from and outdo them. One of his paintings is the “Girl with the Fan”, which Rubens created based on a portrait by Titian, and which Austrian Post is now featuring on a stamp from the “Old Masters” series. Titian (c. 1488-1576), the Venetian master from the Renaissance, painted his “Lady in White” in around 1555, around 70 years before Rubens’ painting. Titian had sent the painting to Philipp II together with a letter in which he described the woman depicted as “the absolute mistress of my soul”. The woman in Titian's portrait is often believed to be his daughter Lavinia, who had married in 1555. However, it could also be Emilia, an illegitimate daughter of the artist. Rubens, likewise, did not know whom the portrait depicted. He had seen Titian's work in the Spanish Court in 1628/29 during his journey to Madrid. From contemporary books he probably knew that young women in Venice wore white when leaving the house after the wedding and therefore interpreted the portrayed as a bride. Rubens may also have known the copper engraving “The Venetian Wedding” by Hendrick Goltzius, in which a bride, similarly attired and with her hair put up in a similar fashion, is depicted. In Rubens’ inventory of his collection, his portrait is described as “Image of a bride”. Rubens mostly painted his copies of Titian's pictures for himself, at the end of his life owning 69 such pictures. Titian's painting significantly influenced later artists from various periods and Peter Paul Rubens engaged with Titian's work with unusual intensity in his own development. Rubens produced a relatively faithful copy of Titian's portrait. However, there are differences in some details. The skin has much more colour in Ruben’s work, and a more nuanced softness; the eyes are opened wider; the décolleté somewhat lower; the hair slightly more curly and the dress more billowy. Overall the young lady looks more lively, corporeal and sensual than in Titian’s work; her smile a little more confident. Ruben’s copy also differs from the original in its particular technique: thus the pale grey background shows through with a bluish tint in certain places, such as the corners of the eyes, making the skin appear light and transparent. The portrait “Girl with Fan”, painted in c. 1628/29 on canvas and not – as is often the case with Rubens – on wood, is now owned by the portrait Gallery of the Kunsthistorisches Museum in Vienna.