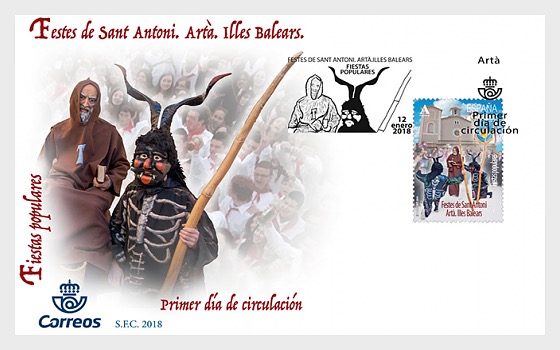 Like every year, every January 17, many corners of Mallorca are dyed red to celebrate Sant Antoni. The music, the torradas, the parades, the correfocs and the traditional beneïdes (blessings) of animals, are the main acts that can be found in different towns of the Island. There are many people who are happy to celebrate this party, but they stand out the festivities of the locality Artà, for its popular and traditional character. On the eve of Sant Antoni, on the 16th of January with the dawn, the town rises with the "es Berenar", a traditional lunch based on chocolate and ensaimadas at the Obrer Major's house. Then begins the parades of the musicians accompanied by the typical demons, which symbolize the evil and temptations of man. In the afternoon, the people prepare to read fragments of the life of San Antonio and sing songs like "Lo Elogi". When night falls, the fires are lit and in the heat of the flames and the dazzle of the fire, people begin to sing "the Glosses". Some of these traditional Mallorcan songs of the night of Sant Antoni, have a marked erotic look and are accompanied by the serious notes of the zambomba. On the big day, January 17, the procession and the traditional blessings of animals are celebrated. After the solemn mass, we read "s'Argument", satirical composition that summarizes the most important events of the previous year. The seal that is issued, and that will leave a permanent record of this tradition, collects an image of the demons escorting the saint, thus symbolizing the numerous temptations to which this saintly anchorite was subjected. This issue corresponds to the series "Popular Festivities", which aims to capture so many and so spectacular festivals and traditions that are celebrated in every corner of our country.