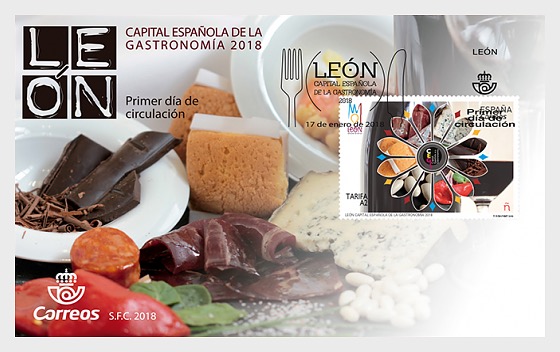 After Logroño, Burgos, Vitoria, Cáceres, Toledo and Huelva, it is the turn of Leon to carry throughout 2018 the title of Spanish Capital of Gastronomy. The jury, composed of professionals from tourism, hospitality and communication and representatives of the Ministry of Agriculture and Turespaña, has opted for the city of León, whose candidacy is supported by the motto Manjar de Reyes. The stamp that is issued, presents an illustration of the famous rosette on the western facade of the Cathedral of Leon, and some of the most significant products of the cuisine of Leon, form a mosaic of colors and flavors as a stained glass. On the one hand, Valdeón cheese, a cheese with a strong flavor that is made with both goat's milk and cow's milk or with a mixture of both and allowed to mature in caves for a long period. Cecina de León has been cataloged since 1994 as a Protected Geographical Indication. This beef jerky is internationally known and has taken the name of Leon around the world. Since the mid-seventeenth century, a kind of pepper has started to be cultivated in Ponferrada, which was dried in the sun and then roasted, which has the Protected Geographical Indication "Pimiento Asado del Bierzo". Bañaza beans share with the peppers so remarkable distinction. There are different varieties of this product, such as Canela, Plancheta, Kidney and Pinta. In León there is a small chocolate industry but very large in flavors. Chocolates that can be tasted in multiple recipes, being the most appetizing in the winter seasons, in a cup of hot chocolate to dip some shortbread from Astorga. The mantecadas are spongy butter sponge cakes made from humble ingredients, with which you get a first product full of flavor. On the stamp appears the logo created for the occasion, with the motto Manjar de Reyes.