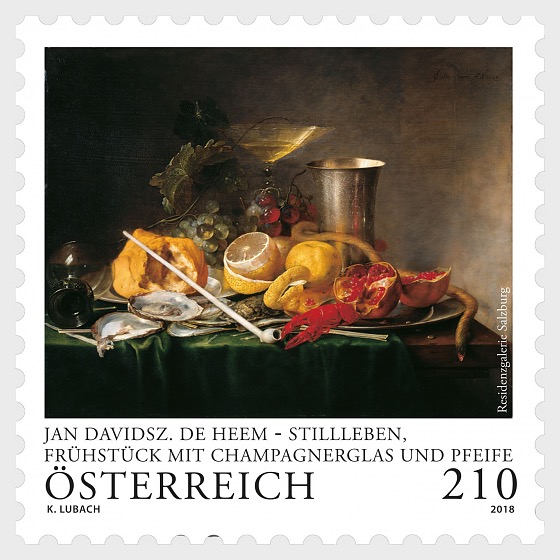 Baroque Splendour in Abundance - Set for only GBP £1.86

About Baroque Splendour in Abundance

Jan Davidszoon (generally abbreviated to Jan Davidsz.) de Heem was born in Utrecht in 1606. In 1636 he moved to Antwerp, where he lived for most of the time until his death. He passed away in 1683.

Jan Davidsz. de Heem skilfully combined the warm, light-dark shades of Dutch painting with the lively, vibrant colours of Flemish art. The individual items in his sumptuous paintings are extremely true to nature and depicted in rich detail.

The oil painting “Still life, Breakfast with Champagne Glass and Pipe”, which is on display in the Residenzgalerie / Dom- Quartier in Salzburg, dates from the year 1642. The magnificent still life depicts a table sumptuously laden with fruits and expensive tableware as well as exquisite oysters and lobster and a loaf of bread arranged in a classic pyramid compo- sition. The Dutch word “banketje” in the painting’s original title, does not, in

fact, necessarily refer to a breakfast, but simply to a light meal.

The artistic light direction, with highlights on the grapes or the glass, and the mel- low tones create a refined three-dimen- sional impression. The practice common among Dutch painters in the 17th cen- tury of depicting the inner structure of an object as if seen through a magnifying glass can be easily recognised in the de- tailed depiction of the cut lemon or the pomegranate.