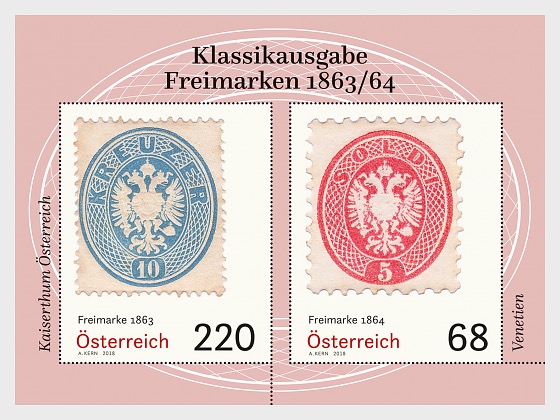 The Imperial Coat of Arms of Austria in an Oval - Miniature Sheet for only GBP £2.55

About The Imperial Coat of Arms of Austria in an Oval

A resolution by the Austro-German Postal Union that the most commonly required denominations for the pertinent postal regions should be issued in the same colours resulted in this new series of stamps being required only shortly af- ter the previous issue. The engraver was once again Josef Tautenhayn.

As for previous issues, these stamps were issued with an edition for the Austrian Em- pire with denominations in Kreuzer and an identical issue for Venetia with denomina- tions in Soldi. The stamps were issued in the following colours: yellow for the de- nomination 2, light green for 3, rose for 5, blue for 10 and light brown for 15 Kreuzer or Soldi. Philatelists pay particular atten- tion to the embossing of the double-head- ed eagle: as the printing plate became more worn, so the coloured details of the eagle became less distinct.

The end of Soldi postage stamps

This edition was issued from the second half of 1863. The stamps were valid for franking in Austria and the Military Fron-

tier until 31st August 1869; in Croatia-Sla- vonia until 31st March 1868; in Hungary, as a result of the Austro-Hungarian Compromise, until 15th June 1867; and in Venetia, which was ceded to Italy in 1866 as a result of the Austrian defeat in the Austro-Prussian war, until not later than October 1866. The Soldi stamps from the 1863/64 series were the last postage stamps to be issued for Venetia. However, stamps with a denomination in Soldi had been valid for post offices in the Levant since 1863 and continued to be used there even after Venetia was ceded until 1869.

This stamp series was manufactured by means of relief printing onto machine paper, gummed with harrow perfora- tions 14. From 1864 onwards, the word “BRIEF-MARKEN” was used as a water- mark, and these new issues also had larg- er perforations (9 1⁄2).

The current block of stamps shows a light blue 10 Kreuzer Austrian stamp with narrow perforations and a 5 Soldi deno- mination with the larger perforations in dark pink.