A Legendary Two-Wheeler from Austria - Set 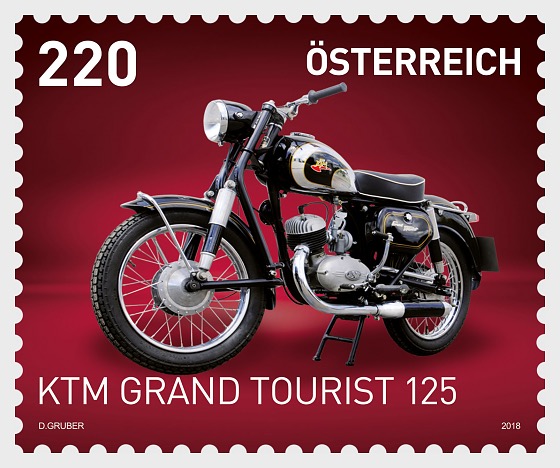 A Legendary Two-Wheeler from Austria - Set for only GBP £2.00

About A Legendary Two-Wheeler from Austria

In 1934 Hans Trunkenpolz founded a fitter’s shop in the Upper Austrian town of Mattighofen, later expanding it to in- clude a vehicle repair shop, which until the end of the war primarily survived by carrying out repairs and manufacturing spare parts.

As the demand for high performance two-wheeled vehicles was very high in the post-war years, in 1951 Trunkenpolz designed a light motorcycle with a 98cc Sachs engine from Rotax. This motorcyc- le with the typical recoil starter was called the Moser-KTM 100, as at that time Trun- kenpolz was the co-partner of a company called Moser & Co. The abbreviation KTM stood for “Kraftfahrzeuge Trunkenpolz, Mattighofen”. In 1953 the first prototypes of the KTM R 100 were presented and serial production finally started.

seat and an output of 6.1 HP. Ernst Kron- reif joined KTM as a financier, the name at that time officially standing for “Kron- reif & Trunkenpolz, Mattighofen”. The successor model followed in 1955: the R 125 Grand Tourist which, like racing bikes, was now equipped with a long swing arm (Earles fork). Around 6,000 units rolled off the conveyor belt until 1958. A particularly interesting fact is that during the 1950s KTM R 125 Grand Tourist motorbikes were employed as “yellow angels”: the ÖAMTC automobile club used Grand Tourist motorbikes with side-cars as breakdown repair vehicles.

KTM subsequently concentrated on the development of mopeds (scooters) and bikes, later adding off-road motorbikes. Even today KTM machines are used for Motocross, Enduro and Supermo- to. Some of the most successful riders are Heinz Kinigadner who won two Mo- tocross World Championships on KTM bikes in the 1980s, and Matthias Walkner who became World Champion in the MX3 class in 2012. Today KTM AG is a holding company with its registered offices still in Mattighofen.