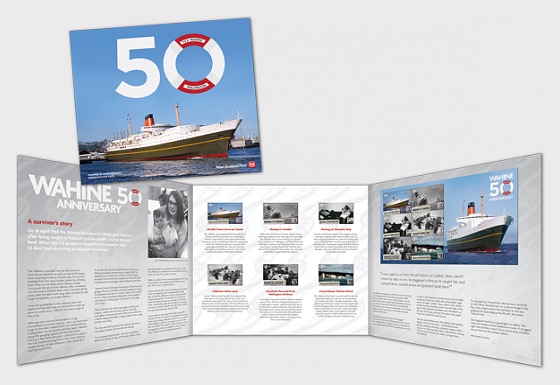 When the Wahine departed Lyttelton Harbour at 8.40pm on 9 April 1968, there were 734 passengers and crew on board. The overnight voyage to Wellington was nothing new to Captain HG Robertson: the often-turbulent Cook Strait was familiar in all its ill-behaved weather and swell. However, on this evening no-one was prepared for the raging storm that occurred when Cyclone Giselle swept down the coast, colliding with a southerly front. The result was one of the worst recorded storms in New Zealand’s maritime history.

In the early hours of the morning on 10 April 1968, Wellington Harbour was encroaching on the near horizon. With the wind blowing at 50 knots, a common stiff breeze in Wellington terms, Captain Robertson made the decision to enter the narrow entrance to the harbour. On entering, the wind suddenly picked up and dramatically increased to a powerful 100 knots. Huge waves slammed the ship, forcing it towards Barrett Reef. With the radar system having failed, the Captain attempted to manoeuvre the ship back out to sea.

The storm continued to wreak havoc, dragging the ship along the reef, causing further damage, and preventing rescuers from approaching it. Its ferocity also delayed the captain’s decision to abandon ship, as he believed that people would be safer on board.

The first survivors began washing up on Seatoun foreshore, and others were plucked out of the water by boats waiting nearby. Most of those tossed into the waves were swept to Eastbourne’s rocky foreshore, where slips prevented rescuers reaching them quickly, and many suffered through being exposed to the harsh, deteriorating conditions. Many would ask how such a tragedy could occur right on the doorstep of the nation's capital. But it did and while a storm raged, many of the people in Wellington at the time went to watch the foundering of the Wahine unfold. News reports quickly spread across the country making this one of the most documented tragedies of our time. These stamps show the Wahine in all her glory and the sequence of how the day played out. The newspaper headings on the stamps are fictitious but acknowledge the role media played in telling the story.

The Wahine as photographed by Warwick Pryce during a berthing manoeuvre in Wellington Harbour. Described by the Union Steamship Company as the world’s finest drive-on passenger vessel, the Wahinecould carry around 1,000 passengers and 200 cars, servicing the Wellington to Lyttelton route for 20 months before she foundered.

When the full force of Cyclone Giselle struck Wellington early in the morning of 10 April the Wahine was on the final leg of the journey from Lyttelton to Wellington. As the ship reached the entrance to Wellington Harbour she lost control and was soon forced onto Barrett Reef, taking on water through a large hole below the waterline.

Sharon Major and daughter Sarah with husband Murray, waiting to evacuate from the Wahine. More than six hours elapsed between the first striking of Barrett Reef and the eventual order to abandon ship, with passengers holding onto hope the Wahine would remain floating. They would be given the order to evacuate early afternoon when the starboard list became too much.

As the Wahine listed heavily to starboard the lifeboats on the port side of the vessel became inoperable, leaving just four starboard lifeboats able to be launched. The first of these would be swamped soon after entering the harbour waters, the remaining three overcrowded boats reaching the shore at Seatoun and Eastbourne.

As the light improved and the weather cleared the predicament of the Wahine reached rescuers in Wellington, with many vessels racing to the scene to pluck survivors from the harbour. Others reached the rocky coast of Eastbourne by themselves, or were carried onto Seatoun foreshore. Here policeman Ray Ruane holds a young survivor by the jetty, surrounded by other police and members of the public.

The Wahine would roll over to starboard for the last time mid-afternoon, and lay on the sea floor in thirty-eight feet of water. Salvage operations were underway within two weeks, but the magnitude of the damage made a full recovery impossible, and plans were made to tow the wreck into Cook Strait. Before that could happen a second powerful storm in 1969 would break the hull up, and further salvage took place where she lay.

A personal story of the tragic events leading up to the sinking of the Wahine is told by Sharon Major – a passenger and survivor – in this collectable presentation pack. The pack contains a set of stamps, a miniature sheet and a first day cover, as well as extra imagery and details of the sorrowful event.