1918 Back from the Brink Miniature Sheet Booklet - Books 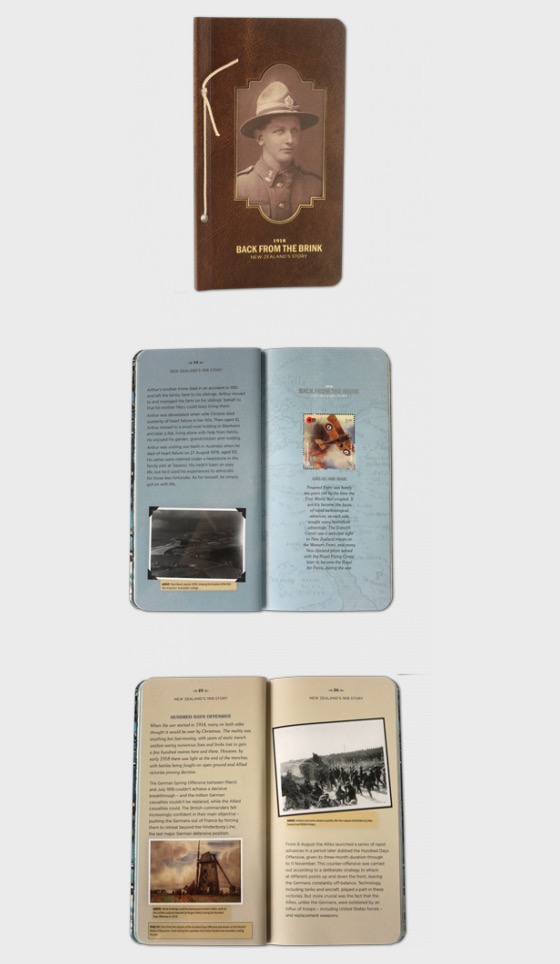 About 1918 Back from the Brink Miniature Sheet Booklet

1918 Back from the Brink is the fifth and final instalment of New Zealand Post's WW1 stamp and coin programme. It takes a look at the final year of this bloody battle, and tells the story of the toll it took on the servicemen and how they adapted on their return home.

By 1918, the war that had meant to be over and done with by Christmas 1914 was beginning to drain those at home and fighting overseas. With nerves frayed on both sides: those at home jumping at the dreaded knock of the telegraph boy while those on the Western front were running on little more than rations and empty rumours.

The stalemate of the trench warfare was yet to be broken despite the use of technology such as tanks and planes. The only glimmer of light for the allied forces was that America had finally come to the party and was gathering its forces. The Germans were being forced back and losing men they could no longer replace; increasingly things were looking up.

On 11 November 1918 the end of the war was firmly in hand. The Germans signed the Armistice, although formally it was cease fire, everybody knew that the war was finally over. All that remained was to get the weary and fatigued men home, a huge undertaking when many of the 56,000 men were already wounded or mentally traumatised. New Zealand had lost a total 16,700 people during the war, the highest number per capita of the dominions of the British Empire.

The central figure in this year's issue is Arthur Gordon, a heroic solider who lost both of his legs while running a message back to headquarters. On Arthur's return home he learnt to live as normal life as possible with his new prosthetic limbs. Despite his disability, Arthur never let his circumstances get him down, instead he became an advocate for disabled servicemen and made it his goal to procure better treatment for his fellow servicemen.

Arthur Gordon, the eldest of eight children from a Tapanui farming family, left New Zealand with the 20th Reinforcements in December 1916. He served on the Western Front in the Otago Regiment from June 1917 until suffering life-threatening injuries during the Allies’ Hundred Days Offensive, losing both legs to an enemy shell. Returning to New Zealand in 1920, Arthur spent much of his life as an advocate for injured and disabled soldiers.

The difficulty of returning 56,000 soldiers to New Zealand meant many remained overseas months after the signing of the Armistice. It was also a difficult time for some of those who made it back, particularly the wounded and those affected mentally and emotionally by war. Influenza would also interrupt the demobilisation process, claiming a number of victims living in demobilisation camps at home and overseas.

The failure of the German Spring Offensive by July 1918 gave the Allies an opportunity to counter-attack along the length of the Western Front, a strategy that saw rapid advances and liberation of enemy-occupied territory including areas shattered by the previous four years of war. Mobility replaced static trench warfare and by the end of three months the Allies were deep behind the old front lines.

The return to civilian life for soldiers was difficult for some. As the number of demobilised men swelled so too did the need for resources to help with their return to work and productivity. More than 12,000 veterans were assisted into homes in the growing towns and cities, while many others chose to work the land, the government supplying loans to those who preferred rural life.

An influenza depot in Christchurch, shown here, was one of the many emergency measures taken by the Public Health Department as the pandemic gripped the country at the end of the First World War. Businesses and public places closed up and down the country but military camps and some communities, particularly Māori, suffered while the virus ran its course.

Powered flight was barely 10 years old by the time the First World War erupted. It quickly became the focus of rapid technological advances, as each side sought every battlefield advantage. The Sopwith Camel was a welcome sight to New Zealand troops on the Western Front, and many New Zealand pilots served with the Royal Flying Corps, later to become the Royal Air Force, during the war.

The Armistice of Compiègne, signed by the Allies and Germany on the eleventh hour of the eleventh day of the eleventh month was the agreement that brought the fighting to a close on the Western Front. Although not a surrender by Germany, the Armistice would pave the way for the peace treaty known as the Treaty of Versailles to be signed six months later. Auckland Town Hall is shown here during Peace Festival celebrations that accompanied the Treaty’s signing on 28 June 1919.

$2.20 Return of the Pioneer Battalion

The reluctance of the High Command to allow 'native' troops to occupy Germany meant the New Zealand Pioneer Battalion, made up mainly of Māori and Pacific Islanders, could return home largely as a single unit in April 1919. Their return would serve as a delayed welcome-home celebration for the New Zealand public, with a pōwhiri at Auckland Domain and parade down Queen Street, before a tour down the country.

In 1923 St Andrews Church, Cambridge, installed a series of windows commemorating the men of Cambridge killed during the First World War. The last panel of three, partly shown here, depicts New Zealand soldiers scaling the walls of Le Quesnoy on 4 November 1918, one week before the Armistice. Many commemorative windows, statues, and plaques were erected after the war in small towns across New Zealand, many of which had been particularly hard hit by war casualties.

As soldiers returned to New Zealand with long-term injuries and disabilities, the New Zealand Government responded by dedicating resources, including investing in hospitals and facilities, towards rehabilitation. The War Amputees' Association, established in 1918 at the New Zealand Military Hospital in Surrey, England, was one of a number of independent organisations who also recognised the needs of the injured and disabled.

Each miniature sheet shows a news article or headline from 1918 recounting to the masses at home the success of kiwi troops. While this news wasn't always completely forth coming, towards the end of the war, the incoming communications were increasingly positive.

The 1918 Back from the Brink commemorative booklet delves deeply into the final months of the First World War.

It includes more details on the fascinating story of Arthur Gordon, from when he left New Zealand in 1916 until his return home in 1920. Far from letting his disability slow him down, Arthur devoted much of his life to advocating on behalf of injured and disabled servicemen.

The booklet also covers the other stamp subjects in more detail, accompanying them with photographs and other images that capture the reality of a war destined to change the world forever.

Order your copy, and you'll learn more about: the Hundred Days Offensive launched in August; the dramatic Kiwi assault on, and recapture of, Le Quesnoy; the arrival of aircraft and their increasingly important role in the war; the long-awaited end to fighting with the signing of the Armistice; the horrors of the influenza pandemic that followed the soldiers home (killing around 8,600 New Zealanders); and the challenging process of demobilisation, rehabilitation and resettlement for the thousands of servicemen who returned.