300th Anniversary of the Birth of Kremser Schmidt - Set 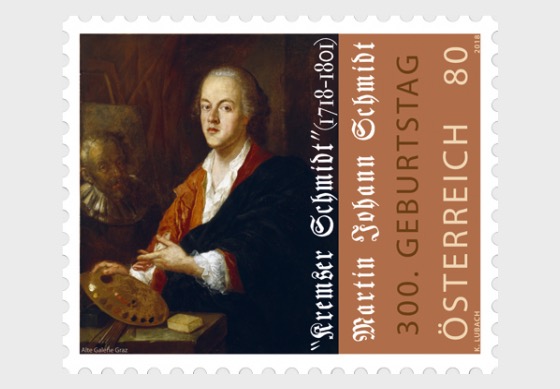 300th Anniversary of the Birth of Kremser Schmidt - Set for only GBP £0.71

About 300th Anniversary of the Birth of Kremser Schmidt

An artist from the Late Baroque period

The self-portrait from the Alte Galerie in Graz is the design for the commemorative stamp which is being issued in 2018 to celebrate the 300th anniversary of the birth of Kremser Schmidt (1718–1801).

25th September 2018 sees the 300th anniversary of the birth of Martin Johann Schmidt, otherwise known as Kremser Schmidt. The painter is one of the most important and best known artists of the Late Baroque and early Neo-classical periods, both at home and abroad. He created around 1,100 paintings, most of them altar paintings, which he supplied to the major monasteries and many parish churches, but his works also include portraits, depictions of scenes from mythology, graphic works and palace decorations.

Paintings by Kremser Schmidt are held and displayed in some museums in Austria, such as the Belvedere and the Lower Austria Museum in St Pölten. The Alte Galerie in the Universalmuseum Joanneum in Graz has a comprehensive collection of 33 paintings, 11 drawings and 10 etchings. A whole room of the Alte Galerie is dedicated to the works of Kremser Schmidt: these include large religious images, a few scenes from mythology and an impressive number of oil sketches (bozzetti), which Schmidt used to prepare his large altar paintings on a small scale.

The self-portrait of a master

A prominent and outstanding work is the self-portrait of Kremser Schmidt that he created when he was about 30 years of age. With this, the Alte Galerie holds the biggest and most meaningful self-portrait of the master. He presents himself in a grandiose pose in his studio with an artist’s smock thrown over his arm. Of particular interest are his tools – brushes, a palette with dabs of colour, a stone for grinding the colour pigments – and, perhaps even more so, the portrait on the easel, which probably depicts his role model, the famous engraver and etcher from Lorraine, Jacques Callot. Here he deliberately points to the prestigious status of the artist, who enjoyed a good relationship with the Academy of Fine Arts in Vienna; Schmidt was only admitted to the latter in 1768. It is reported that he remained productive right up until his death. (Dr. Christine Rabensteiner)