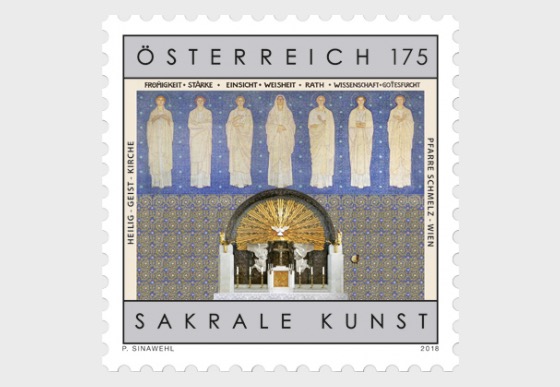 The commemorative stamp from the “Sacred Art in Austria” series shows the high altar of the Heilig-Geist- Kirche (Church of the Holy Ghost) on the Schmelz former parade ground in Vienna’s Ottakring district, which depicts the seven gifts of the Holy Spirit.

The engraving makes the larger-than-life figures over the high altar stand out exceptionally well. They are allegorical representations of the gifts of the Holy Spirit: piety, fortitude, understanding, wisdom, counsel, knowledge and fear of the Lord. They are situated within an altar mosaic with floral ornamentation on a blue background set over the elaborate high altar and which depicts the action of the Holy Spirit. The design for the altar mosaic came from Ferdinand Andri, an Austrian artist who was also a member of the Vienna Secession. The high altar was designed by Adolf Otto Holub, modelled on the Kirche am Steinhof; the metal reliefs are the work of the sculptor Michael Six.

The Heilig-Geist-Kirche is an impressive sacred building in the historicising style and one of the first churches in Europe to be made of reinforced concrete. Its main façade is reminiscent of a Greek temple, whilst the interior of the church comprises a single open space which is divided up by two self-supporting beams spanning over twenty metres.

The church was designed by the Slovenian architect Jože Plečnik (also written as Josef Plecnik), a pupil of Otto Wagner. He completed the first sketches in 1910, but the project was repeatedly redesigned. Ultimately, due to a lack of funds, it became a very simple church building without a tower, made of the cheap material reinforced concrete. The foundation stone was laid in June 1911 and mass was celebrated in the crypt below the sanctuary as early as July. The church was completed in time for Christmas 1913.

Duchess Sophie, the wife of the heir to the throne, Franz Ferdinand, took on the patronage for the building of the church and decided that the church should be dedicated to the Holy Ghost. Like many other Viennese, Franz Ferdinand is reported to have been unenthusiastic about the modern building and to have described the church as “a mishmash of a temple to Venus, a Russian bath, and a stable”.