100th Anniversary of the Birth of Leonard Bernstein - Set 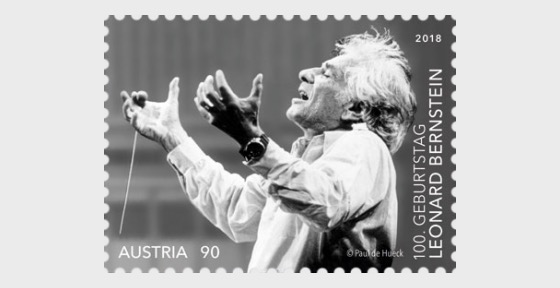 100th Anniversary of the Birth of Leonard Bernstein - Set for only GBP £0.80

About 100th Anniversary of the Birth of Leonard Bernstein

By issuing a commemorative stamp on the 100th anniversary of his birth, Austrian Post is celebrating an extraordinary composer, pianist and conductor who had close links to Austria, a country where music has a long tradition: Leonard Bernstein

Bernstein was born the son of Jewish immigrants on 25th August 1918 in Lawrence, Massachusetts in the USA. His first name was actually Louis, but he changed this to Leonard as a young man. He learned to play the piano while just a child and soon gave his first public performances. In 1939 he graduated in music from the renowned Harvard University. His first major appearance as a conductor followed as soon as 1943, when he stepped in for a colleague who had been taken ill and conducted the New York Philharmonic Orchestra, bringing him national fame and many more engagements.

Bernstein soon began to compose his own works, and his Symphony No. 1 Jeremiah was performed for the first time in 1944. In addition to orchestral and theatrical works, chamber music and piano pieces, Bernstein is best known for his musicals, especially West Side Story from the year 1957. The legendary film of the same name from 1962 won ten Oscars. His first musical, On the Town, which he wrote in 1944, was also made into a film with Gene Kelly and Frank Sinatra in 1949.

After the Second World War, Bernstein also worked in Europe, with Austria playing an important part in this: in 1959 he conducted at the Salzburg Festival for the first time and he was a regular guest conductor for the Viennese Philharmonic and at the Vienna State Opera from the 1960s on. In 1970, on the 200th anniversary of Beethoven’s birth, he made a film about the composer in Vienna. One of Bernstein’s last major appearances as a composer was at Christmas 1989, when he conductedBeethoven's Ninth Symphony with musicians from around the world at the Schauspielhaus in East Berlin to celebrate the fall of the Berlin Wall. Leonard Bernstein was also to have conducted the NewYear’s concert in 1992, but died on 14th October 1990 in New York. This exceptional artist left behind a comprehensive and diverse oeuvre of compositions and recordings. The commemorative stamp shows him in a photograph by Paul de Hueck completely in his element, in other words, conducting.