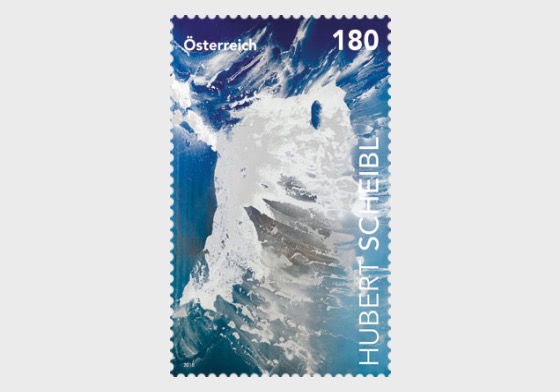 The creator of powerful imagery

The 2.90 by 2 metre painting “Big Es” is the design for this special stamp. It was created in 2014/2015and the title (English: “Big Id”) points to the artist's intellectual preoccupation with Sigmund Freud, the founder of psychoanalysis.

Hubert Scheibl was born in 1952 in the Upper Austrian town of Gmunden. From 1976 to 1981 he studied under Max Weiler and Arnulf Rainer at the Academy of Fine Arts in Vienna. Soon afterwards, in 1985, he, along with Gunter Damisch, represented Austria at the Biennial in the Brazilian city of São Paulo. Numerous international exhibitions followed, including at the Biennale di Venezia and in New York, Paris, Shanghai, Korea, Berlin and Sydney. Scheibl’s works are included in famous collections around the world, among them the Centre Pompidou, Paris; the Michael and Susan Hort Collection, New York; the Leopold Museum, Vienna; the Albertina and the Belvedere. He is a memberof the “New Wild Ones”, a group which was formed in the 1980s, the main characteristics being large-format pictures with a deliberate formlessness, decisive brush strokes and strong use of colour.The New Wild Ones are proponents of expressive abstractionism.

On the alchemy of seeing

Hubert Scheibl is one of the most important Austrian artists of the modern age. He says of his work,

“In the alchemy of seeing, the limits of our images are the limits of our world. The image often has a remnantof memory, a trace that points beyond what can be seen. My work is a searching movement that intuitively converges on unknown fields of energy and forms of energy, oscillating constantly between here and there.”

US American art critic Donald Kuspit wrote of him: “Scheibl’s paintings are authentically pre-pictorial, like the best abstract art. That is, they articulate a surface that is not so much a screen on which images areprojected as a seismograph registering primordial sensations.”

“Big Es” particularly impresses thanks to its layer of silver. The first works in the history of painting touse this “non-colour”, “Nicotine on Silverscreen”, were created in 2009.