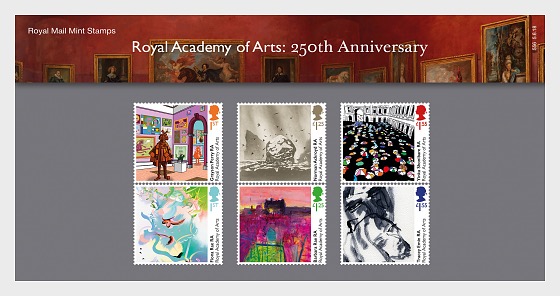 The Royal Academy of Arts - Presentation Pack for only GBP £7.45

About The Royal Academy of Arts

The Royal Academy of Arts (RA) is a charity that serves to promote art and artists. It is an independent body and does not receive funding from the Government instead relying wholly on the support of visitors, friends, Patrons, donors and sponsors. Founded in 1768, the mission of the RA is to promote the enjoyment and appreciation of the visual arts and give a platform for artists. It runs public exhibitions and gives talks, encouraging debates to further these aims. The RA also funds a postgraduate art school, which serves to train new generations of artists and which is the oldest art school in the UK.

The RA is based in Burlington House, Piccadilly, London where building work has been underway to unite the existing buildings and provide a 250 seat auditorium, a learning centre as well as new galleries for the RA’s art collection – due to open this year.

Many of the world’s most successful exhibitions have taken place at the Academy, attracting up to one million visitors each year. The RA’s most famous exhibition, the annual Summer Exhibition, is the largest open submission of its type in the world, attracting thousands of works from the public. It has been held every year uninterrupted since 1769 and is co-ordinated by a Royal Academician. It provides both emerging and established artists a unique platform to showcase their work in a variety of mediums. Most works are for sale, giving visitors the opportunity to own original artworks by leading artists of today and tomorrow, with proceeds allowing the RA to continue providing, free, world-class postgraduate tuition in its Schools. In this special year for the Royal Academy of Arts Grayson Perry RA will take charge of co-ordinating the Summer Exhibition which will run from 12th June to 19th August inclusive.

Royal Mail will mark the As 2018 marks the 250th anniversary of this world-renowned organisation, Royal Mail has decided to commemorate this milestone and celebrate the artistic excellence of the Royal Academy and UK arts with a set of six Special Stamps. It has specially commissioned six RA members to design a stamp giving their personal portrayal of the Summer Exhibition, one of them fittingly being Grayson Perry who is coordinating this year’s Summer Exhibition.

Grayson Perry CBE is particularly renowned for his ceramic vases but also works with printmaking, drawing and embroidery. He is an astute commentator on contemporary society and culture and has a female alter-ego, Claire. He did an art foundation course at Braintree College of Further Education before graduating with a Batchelor of Arts Fine Art degree in 1982. He has written several books as well as made TV documentaries and is a Turner Prize winner.

Hong Kong-born artist Fiona Rae has developed a distinctive style of work over the past 25 years, which is full of restless energy, humour and complexity and which has set out to challenge and expand the modern conventions of painting. She studied Foundation at the Croydon College of Art before gaining a BA Honours in Fine Art at Goldsmiths College in 1987. She has been shortlisted for the Turner Prize, served as a Tate Artist Trustee and became the first female Professor of Painting at the Royal Academy of Schools in 2011. She has exhibited extensively in galleries and museums throughout the world and her work is held in prestigious public and private collections.

Leeds born Norman Ackroyd CBE is an artist and printmaker who has been a Royal Academician for 30 years. He was appointed Professor of Etching at the University of Arts in 1994 and elected Senior Fellow at the Royal College of Art in 2000. His work can be found in several British and American galleries including the Zillah Bell Gallery, the Tate, the British Museum and the National Gallery of Art, Washington. He has also appeared in several television programmes, the most recent being a feature in an episode of BBC’s Countryfile in 2017.

Barbara Rae CBE is a Scottish painter and printmaker who studied at the Edinburgh College of Art and has taught art at the Aberdeen College of Education as well as at the Glasgow School of Art. She has received numerous awards for her art, with a number of works being displayed in institutions such as the University of Edinburgh, University of Glasgow, British Museum and Whitworth Art Gallery. The Royal Academy of Arts’ magazine, RA, has described Rae’s works as “intense colour bursts that evoke dramatic landscapes but remain resolutely abstract... distilling the colour, light and forms of nature into dazzling visions”.

Yinka Shonibare MBE is a British-Nigerian artist whose work explores cultural identity, issues of race and class through the media of painting, sculpture, photography and film. He studied Fine Art at the Byam School of Art (now Central Saint Martin’s College) as well as Goldsmiths College. A Turner Prize nominee, he was awarded a MBE in 2004, a title he has added to his professional name. He has not allowed his physical disability to restrict his creativity, using assistants to make works under his direction. He has works displayed in prestigious institutions including the Royal Opera House, the Tate Collection, Victoria and Albert Museum, the National Museum of African Art and the Smithsonian Institution in Washington DC.

Tracey Emin CBE is renowned for her autobiographical, confessional and often candid art, working with a variety of media including drawing, painting, sculpture, needlework, film and photography. Born in Croydon in 1963, she studied fashion at the Medway College of Design and later printing at Maidstone Art College before obtaining a Master of Arts in painting at the Royal College of Art in London. She became a Royal Academician in 2007 and in December 2011 she was appointed Professor of Drawing at the Royal Academy, being one of the first two female RA Professors along with Fiona Rae. She has exhibited and given lectures extensively throughout the world and is a Turner Prize nominee. .