100 Years of the Republic of Austria - Set 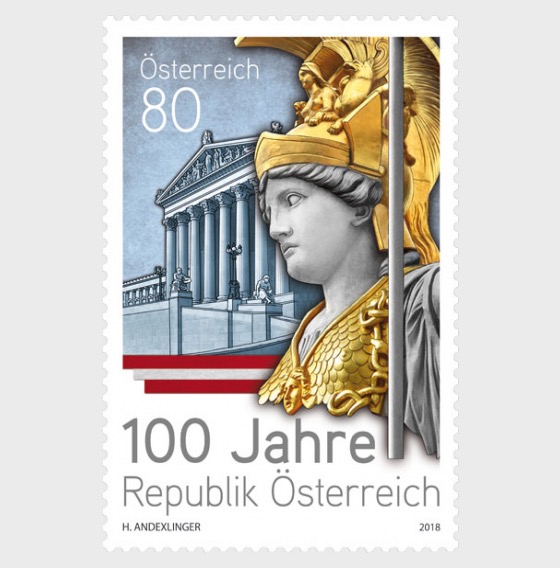 About 100 Years of the Republic of Austria

After the end of the First World War and the fall of the monarchy, the Republic of Austria was created in 1918. Austrian Post is dedicating a commemorative stamp to this significant anniversary.

On 21st October 1918, the Provisional National Assembly convened, after which a provisional constitution was enacted and a State Council established. The first State Chancellor was the social democrat Dr. Karl Renner.

The German-Austrian Republic, as it was then called, was proclaimed on 12th November 1918 in frontof hundreds of thousands of people who had gathered on the ‘Ring’ (Vienna’s ring road) in front ofthe parliament building. On the previous day, Emperor Charles I had renounced all participation in affairs of state.

On the same day, women were accorded the right to vote, and they were able to exercise this right for the first time at the elections for the Constituent Assembly on 16th February 1919. During the signing of the Saint Germain Peace Treaty in the same year, the “Republic of Austria” was chosen asthe new name for the country and a provision banning union with Germany enacted.

The centenary on stamps

On the stamp the figure of Pallas Athena is particularly prominent, and indeed, even when the building was being constructed in 1874-1883, she was seen as a symbol of the still young parliamentarianism. Pallas Athena is the Greek goddess of wisdom, war and peace. Her resilience derives not from skill in battle, but from her clear and cool reasoning. The marble statue of Pallas Athena on the monumental fountain in front of the parliament building holds a golden globe surmounted by the goddess of victory Nike in her right hand, and a spear in her left. She is wearing a golden helmet and has a golden hide over her shoulders. The colour gold, which is particularly impressive on the stamp, was, from the earliest times, considered the colour of the gods and symbolises wealth and wisdom. On the occasion of the centenary, the Austrian Mint is also issuing a special 2 Euro coin bearing the same design.