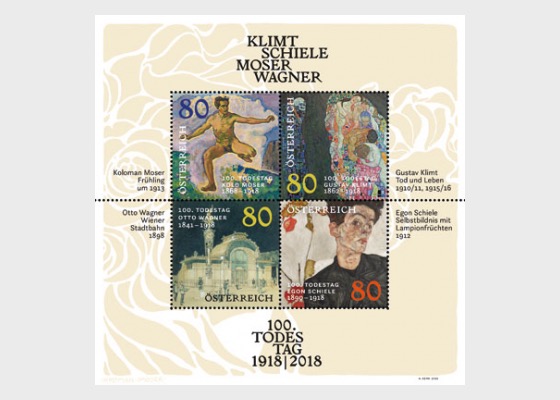 About 100th Anniversary of the Death of Klimt – Schiele – Moser – Wagner

A fateful year for Viennese modernism

In 1918 four of the most important artists of the modern age died: Gustav Klimt, Egon Schiele, Koloman Moser and Otto Wagner. Now they are being celebrated jointly on a block of stamps.

The period around 1900 was a golden age for art and culture in Vienna. In 1897 the association of artists known as the Vienna Secession was founded. Its motto Ver Sacrum, “sacred Spring”, whichwas the title of an important art journal, symbolised the hope of a new awakening in art. In the field of handicrafts, the Wiener Werkstätte strove to expand art into an everyday context; the decorative Jugendstil, with its sweeping lines and floral elements, superseded historicism, and expressionism started to develop.

Born in 1841, Otto Wagner's buildings still give Vienna much of its character even today. Whilsthistoric buildings still predominate in Vienna’s Ringstraße, his Postal Savings Bank building, the Kirche am Steinhof church and the pavilion on the Karlsplatz demonstrate the emergence of the Jugendstil. Wagner also designed the Viennese light urban railway, much of which is still in use today as the underground system. Gustav Klimt, who was born in 1862, was the first president of the Vienna Secession and one of his main works, the Beethoven frieze, is also displayed in the Secession building. His best-known works worldwide include “The Kiss”, the “Golden Adele” and his landscapesof the Attersee region. Koloman Moser, born in 1868, is mostly known as a graphic designer and an artisan. He designed many posters, book covers, postcards, bank notes and even stamps. He also designed furniture, glasses and textiles, as well as glass windows like that for the Kirche am Steinhof. Egon Schiele was born in 1890. He soon turned his back on the Jugendstil and played a significant role in the development of expressionism in Austria. His nude drawings and self-portraits in particular demonstrate his genius and his characteristic use of colour and form.